Reaper of Souls is the title of the first Diablo 3 Expansion pack released sometime in March 2014. Like other Blizzard expansions, it requires a separate purchase, though unlike World of Warcraft, there is no monthly fee.

The name was revealed by Blizzard on August 13, 2013, via a teaser image posted on their Diablo 3 website.[1]

The first full reveal came at the 2013 Gamescom convention August 21-25, where Blizzard scheduled a press conference for the first day[2] at which they debuted many details about the expansion pack including the new Crusader class, a gameplay movie, and the introductory cinematic featuring the lead enemy of the expansion, the ArchAngel Malthael.

Many of the new features coming for Reaper of Souls are going to be enabled in similar form in Diablo 3 classic as well, in a free patch released before Reaper of Souls. These include Paragon 2.0, Loot 2.0, Nephalem Trials, the ladder system and possibly the guild system and other changes.

Some other features will be found exclusively in Reaper of Souls, a tentative list of these include:

Blizzard has been sending emails to select Diablo 3 players inviting them to take part in a Reaper of Souls survey which poses numerous questions such as what games you play (Blizzard or other) and importance of specific features in the expansion including:

Blizzard also asks survey participants to rank these in order of importance in the survey, Rank #1 being the most important to 8 being the least important to you from that list. The survey also asks about prices; the suggested price points are Standard Edition at $29.99 and a Collector’s Edition at $49.99, and fans were asked which they'd be more likely to purchase.

Details about the Reaper of Souls story and setting have been revealed by Blizzard and are covered in the Book of Tyrael as well.

The events take place some months after Diablo 3 concluded with the Nephalem hero defeating Diablo (as the Prime Evil) and freeing the High Heavens from the demonic invasion.

The quotation on the image comes from the Book of Cain, and is part of a longer quatrain:

And, at the End of Days, Wisdom shall be lost
as Justice falls upon the world of men.
Valor shall turn to Wrath-
and all Hope will be swallowed by Despair.
Death, at last, shall spread its wings over all-
as Fate lies shattered forever.

This refers to the Archangels of the Angiris Council, and appears to describe events that unfolded during the story of Diablo 3, with foreshadowing for the story of the expansion.

As seen during Act 4 of Diablo 3, Imperius fought Diablo as the Prime Evil and was defeated and badly wounded, but not killed. After that setback Imperius led the angels in unsuccessful defending the High Heavens against the forces of the Burning Hells, and was overtly hostile to the Nephalem hero (your character), seeming on the verge of attacking before falling unconscious once Diablo reached the summit of the Silver Spire.

While the other Archangels are seen in the epilogue after the hero defeats Diablo the Prime Evil, nothing is known of Imperius' disposition, but from his behavior during Act 4 it doesn't seem likely that he's happy. The above quotation from the Book of Cain surely refers to Imperius with the line, "Valor shall turn to Wrath" and many fans are speculating that he will not rejoin the Heavens but will instead become an enemy of humanity, or perhaps even a corrupted monster, like Izual before him.

Numerous screenshots, concept arts, and video teasers have been released for Reaper of Souls.

Prior to the official announcement, Blizzard offered several teases of Reaper of Souls.

The first was a teaser page that went live several days before Gamescom 2013 in August. The image seen below was the only contents of the page and it was not clickable. Many fans assumed the image would be updated with brigther and brighter versions before becoming clickable to the official announcement, and this was proven accurate. 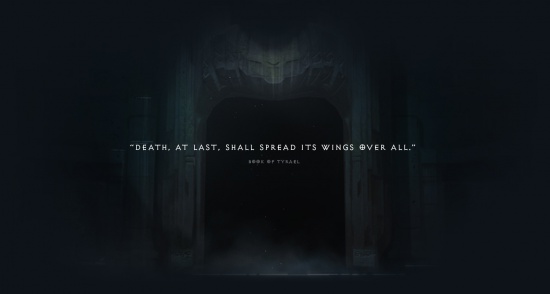 Another teaser came via the official Diablo 3 Chinese service provider (B.net equivalent) site in the run up to Gamescom 2013 a splash image appeared at the top of their site that changed daily, until on the seventh image angels began to appear together with the Black Soulstone.