Nephalem Trials were planned as a feature[1] in Reaper of Souls, but did not make it into the game. They were going to be arena-like mini-dungeons accessed through "Death Orbs" that players could encounter in any dungeon in the game. In a Nephalem Trial player(s) would have faced huge waves of incoming enemies, and earned rewards for surviving through higher and higher numbers. 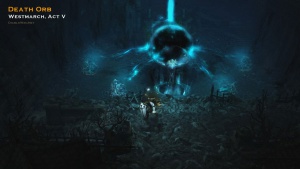 Pass through the Death Orb.

The developers said Nephalem Trials were inspired by the Jar of Souls event from Act One, where players must stand their ground against ever-increasing numbers of skeleton attackers. [2]

This feature was first revealed in Blizzard's official Reaper of Souls FAQ, in a section about new game modes:[3]

In November 2013 Blizzard announced that Nephalem Trials were not going to be ready when Reaper of Souls was released, though they hoped to patch them into the game (and into D3V) sometime afterwards. [4]

[blue]Nephalem Trials are indeed still alive in some form, but they will not be added with the launch of Reaper of Souls. We absolutely love the idea behind the Trials (challenge-based systems can be so much fun), but before we implement them we want to make sure they have a strong underlying reward structure and tracking system. That kind of hook is important for a system like this and we didn’t want to add in Nephalem Trials to the game without it.

The gameplay felt great and was in a good place at gamescom 2013 where we announced them – which is actually why a lot of the individual Trials have been added on their own as standalone events into Reaper of Souls – but the mechanism that made the overall system feel meaningful over a long period of time wasn’t and would take some pretty significant tech and time to implement (in this case, at the expense of other features as well).


Rather than delay the release of the expansion to make sure Nephalem Trials could make it in with all the necessary components, we made the decision to cut them for now and re-focus our efforts on making sure other key systems like Adventure Mode, Bounties, Nephalem Rifts, and Clans & Communities (just to name a few) are solid. It’s not an ideal scenario, but these are the kinds of hard calls we sometimes have to make in a world where we can't stack +Maximum Resource.

Code strings in early Reaper of Souls datamined information list a number of types of Nephalem Trials. These are early versions of the content and may be entirely different in the final product.[5]