The Angiris Council is the highest known authority of the High Heavens. It consists of five senior Archangels who govern and administrate the laws and rules by which all other Angels abide, a heavenly counterpart and opposing force to the three Prime Evils of the Burning Hells, their eternal adversaries. Each member of the Council has their own specific sphere of influence, which define what they are and their respective function in the High Heavens, much like the Prime Evils themselves.

First mentioned in Chapter 11 of Birthright, the first book of the Sin Wars series, by Inarius, the Council is formally introduced in Chapter 22 of The Veiled Prophet in The Sin War novels, when they judge Sanctuary. The Council convenes in the legendary Silver City.

The Archangel of Justice. Male. Golden robes and armor. Driven by a high sense of honor and order, and formerly rigid and unbending. Tyrael's personae has largely been formed by Uldyssian's sacrifice - a Nephalem, who reached such incredible levels of power but chose to put an end to his life to save his world and his own humanity rather than wield it to become a god. Tyrael was so greatly shocked and impressed by Uldyssian's selfless action that he changed his legalistic worldview and grew endlessly fond of the human race. Through his endless attempts to aid humans in their lives, Tyrael (ironically, as he himself champions Justice) has become somewhat of the "outlaw" of the Angiris Council. Responsible for the destruction of the tainted Worldstone.

The Archangel of Hope. Female. Robes of soft blue. Her nature is sympathetic, advocating mercy over brutality, and she was the most animated of the five, defending the existence of Sanctuary and of humanity. Auriel is the most upbeat member of the Council, yet is also serious and infinitely wise, serving as the "heart" and "grounding force" of the group and keeping them together in difficult times; if the Council was a role-playing party, she would be the cleric. Wielder of the Cord of Hope, which can be used either to bestow blessings or as an offensive "energy ribbon" weapon.

The Archangel of Wisdom. Male. Gaunt figure whose robes and breastplate are black. Malthael is the voice of reason and conciliatory within the Council, respected by all the others. Although formerly one of the brightest of all Archangels, constantly pondering the Universe and the truth of reality, upon Inarius's theft of the Worldstone, the "heart" of reality, Malthael's character began to darken, which eventually leads to his becoming a very grim figure among the Angels.

The Archangel of Valor. Male. Robes of royal red with a shining breastplate upon which the image of an upturned sword blazes. His nature is fierce and commanding, he is a deadly warrior for the High Heavens, and he thinks that Sanctuary should be destroyed. Having fought since the dawn of time and having slain billions of demons since, Imperius is often in conflict with Tyrael, as valor can so often turn to pride, due to differences in their vision for how things should go.

The Archangel of Fate. Sexless. Grey-clad Angel. The Great Lorekeeper of the High Heavens, and an Angel with vast knowledge of nearly everything. Though he rarely speaks, he is sought for guidance by his brethren in times of crisis. While unable to "see the future as such", he can see the strands of possibilities of things to come, but one thing eludes him still: Itherael cannot see mortals or their futures, as their existence was not meant to be at all. Despite this, Itherael, after much consideration, voted for humans to be given their chance, as their potential to serve the Light could surpass even that of the Angels.

Male. Acted as the Council's Advisor. Robes as bright as sunlight. Breastplate with the shine of copper. Tired of fighting the eternal wars of the Great Conflict, he left the Council and the High Heavens to steal the Worldstone and create Sanctuary with Lilith of Hell, only to be condemned by the Council and banished to the Demons as punishment. Father of Rathma and many other Nephalem. While Tyrael is said to be naturally far stronger than Inarius, Tyrael himself admits that, even before claiming the Worldstone, that Inarius was always "powerful, but no more so than any on the Angiris Council..." Possibly the Archangel of Creation and "brother" to Tyrael (in the sense that they share similar resonances).

Tyrael and Imperius, before his voting in favor of the humans after the Sin War, were close comrades in battle and both were said to be valiant and mighty warriors for the High Heavens, with Imperius even going as far to call Tyrael an "old friend". However, after Tyrael opposed Imperius, the Eternal Conflict came to a grinding halt, resulting in great tension and argument between Tyrael and Imperius, exacerbated by their continued differences of opinion (and by Tyrael's later actions), though at times eased by Auriel's intervention.

Of all the Archangels, it has been "observed" that Itherael is closest to Auriel, and, whether or not this was a factor in his own choice, Itherael ultimately sided with Auriel's decision to spare humanity. It was Imperius who asked Itherael, who had agreed with his demand for a vote, for his own decision when the Council judged Sanctuary, and it is said that Imperius asked Itherael for the ultimate outcome of the Eternal Conflict, but has never received a true answer from the latter. However, even Itherael does not always agree with Auriel's views, as evidenced when he sided with Imperius and Mephisto instead of Auriel when she insisted upon humanity's right to retain their memories of the Sin War.

Besides her close relationship with Itherael, Auriel is said to be the "counterpart" of Imperius, and strongly opposed his urging the Council to eliminate mankind, for she saw great potential for good in them. However, instead of taking sides in the disputes between Tyrael and Imperius, despite her conspicuously sharp contrast with the latter, she uses her Cord of Hope to temper both.

It is known that the mysterious and solemn Malthael is greatly respected, and perhaps now to some extent feared, by the other members of the Council, but very little is known about his specific relationships with the other four. However, as Auriel asked him for his choice during the vote deciding Sanctuary, it seems that the other four are aware that he can easily take either stance in any issue, or, as it proved to be the case, neither.

Concerning Inarius, it is known that he and Tyrael were once close, having similar resonances and thus considered themselves to be brothers, in a sense, but despite the former's petitions, even Tyrael seemed unable to see what Inarius called "reason", nor what he deemed to be the futility of the Eternal Conflict. Even when Tyrael found Sanctuary by himself, despite his expressed shock and displeasure at Inarius's crimes, he did not immediately call down the Heavenly Host. None of the five, not even Tyrael or Auriel, objected to Inarius's sentence or agreed with his actions, though Imperius was palpably harshest, bent on eternally imprisoning him, and Tyrael told Inarius that he brought his fate upon himself before Mephisto claimed him.

It was these five Archangels that decided the fate of Sanctuary after the hidden world was discovered. Their original plan was to destroy it, mostly with Imperius' aggressive backing, but the five were forced to take a vote due to extended circumstances and complications. The main point against its existence was also the reason for it to be preserved - the humans having the blood of both Angels and Demons in them had the potential to be stronger than both, serving as powerful allies in the eternal Sin War. The result was in favour of letting Sanctuary live on. Imperius vouched for Sanctuary's destruction seeing humans as an abomination containing foul demon blood while Auriel and Itherael saw its potential as a powerful ally. Malthael claimed that in the end the matter did not concern him, so didn't vote. It was Tyrael who had the final and most impacting vote which saved Sanctuary from imminent destruction.

The Council made a pact with the eldest of the Prime Evils, Mephisto, that he would leave Sanctuary untouched in exchange for the traitor Inarius, who created Sanctuary, an act forbidden by the Council. Sanctuary was then left in the hands of the humans, with their memories wiped, allowing them to grow from the beginning and ultimately to their own end. Each individual is left to decide either to live by the light or the dark.

It may be notable that, ironically, as the five Council members do not seek humanity's worship or unfaltering obedience to themselves, unlike Inarius (as Trag'Oul pointed out), only their aid in the Conflict against Hell, and did not play any role in the development of Sanctuary's many religions, and despite the corruptive influence of the combined Prime Evils predating even the Sin War itself, the holy Zakarum faith, based on following not the Angels, but rather the Light they claim to serve, nevertheless attracted the vast majority of Sanctuary's human population and spread across borders to quickly become the dominant political and social force in the realm, eventually leading to the rise of the entire Paladin class. 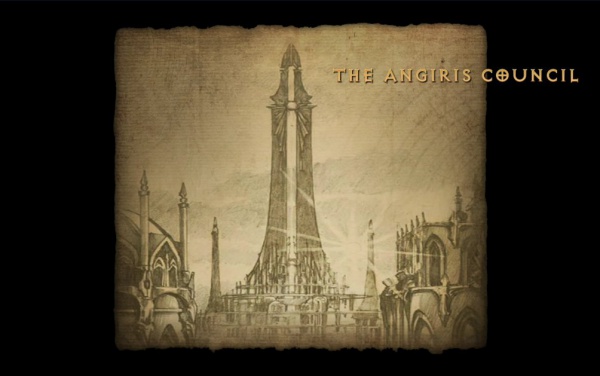 Concept art for the Angiris Council as seen during Blizzcon 2011.