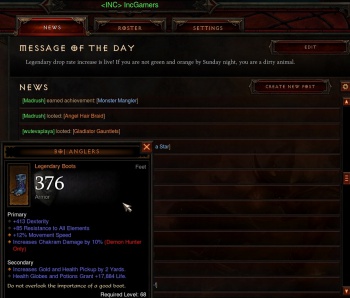 Clan and Community support was added to Diablo II in February 2014 (nearly 2 years after the game's initial launch) as part of the extensive D3v2 changes.[1]

Clans allow players to join their accounts into one common group which provides various social features including easy messaging within the clan, open game display and easy joining, legendary item find and achievement completion notification, and more. They are handy and many players enjoy being in a clan, but they are not mandatory and do not provide any special features or bonus content.

While many fans took advantage of the clan and community functionality once it was added to the game, it often seems that the list of wanted feature additions is longer than the list of actual features.

The maximum members allowed in a Clan is 150, which has forced active community sites to create multiple clans[2] after their first offerings filled up immediately. Blizzard has not replied to requests to allow more people into the same clan, as they suggest players use Communities for larger groups.

The developers were asked about clan or guild support many times during Diablo III's development. They often said they hoped to provide support, but that they could not offer any ETA or specifics.

Jay Wilson replied to questions about Guilds at Blizzcon 2008[3], just months after the game was announced. He confirmed that guilds are on the drawing board, and that cooperative online play is a cornerstone of the series. He also noted that guilds will be supported, but not mandated. They are not planning to include "raid" style content in Diablo III; monsters or dungeons that could only be enjoyed by large groups.

Fans hoped for Clans to be debuted with Battle.net 2.0 in 2011, but while that update added new clan-like social features to Battle.net, they were only functional for Starcraft II, and Diablo III did not gain clan support until years later. 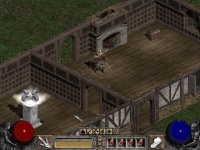 Blizzard North spoke often of supporting Clans and Guilds in Diablo II, but no such features made it into the live version of the game. Pre-game some images of a Guild House and the guild bank were revealed, but these never got beyond the rough draft stage.

Gallery of images of Clans and Communities in Diablo III and Reaper of Souls.