Jailer is a Boss Modifier in Diablo III. Bosses and Champions (and Elites) who possess this ability can "jail" characters and their pets for a short period of time. While jailed an orange circle of light appears around the target, and they are held in that location until the jail dissipates.

Jailer bosses have a 25% chance to jail their targets with each attack, and the effect last for up to 3 seconds, though on Normal difficulty the duration is much shorter than that. Various equipment can also lessen the duration of the effect. 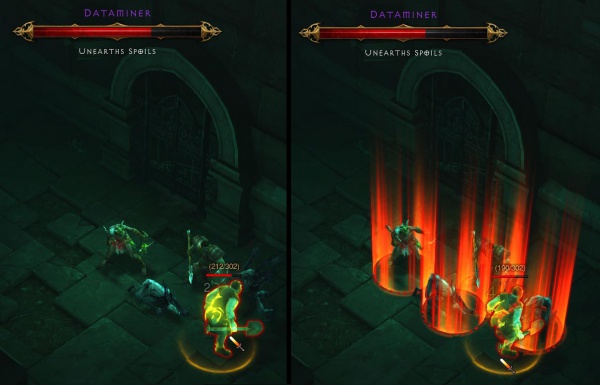 A Witch Doctor, Mongrels, and Templar jailed by the Dataminer.

Jailed targets can still fight, hit enemies, cast spells, drink potions, etc. They just cannot move, though some skills will allow an escape from the jail. This boss property is also possessed by a good number of Elites, most notably (and appropriately) by The Warden.

Jailer is often inconvenient and scary, but as it's only cast occasionally and the duration is fairly short it's not usually lethal. The biggest danger, other than being hit by enemy attacks that you can not move to avoid, comes from other Boss Modifiers. Though Jailer does no damage, it can pair with deadly AoE properties like Arcane Enchanted, Plagued, Desecrator, or Mortar to destroy an immobilized character.

Players need to learn not to panic and to keep fighting while jailed -- new players often freak out and spend all their time struggling to escape, rather than continuing the battle. It's also helpful to know which of your skills can and cannot escape the jail, so you do not waste resources using skills that won't help. For instance, Demon Hunters can not break out with Vault or the backflip from Evasive Fire, though they can cast those skills while jailed, wasting Discipline while moving not an inch, and potentially having no resource left once they are free. Debuff removing skills and effects, such as using the Demon Hunter's Smoke Screen can benefit a player who needs to escape being Jailed quickly.

The jail can be broken out of by a number of movement and defensive skills, while some others do not escape the prison. This section notes all the relevant movement skills and their effectiveness.

The jailer property does not alter the appearance of the boss or Champion in any way, so players don't know about it unless they see the tooltip hover text, or the orange jail cell pops into existence around them.