Poison Enchanted is a Boss Modifier that spawns on Champions and Bosses in Diablo III Reaper of Souls. [1] It is also found in Diablo 3, where it was added in Patch 2.0.1, released around the time of Reaper of Souls. 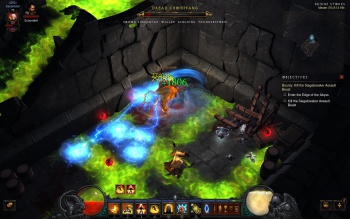 "Poison Enchanted" was a boss ability in Diablo 2, but the name is the only thing it has in common. The function is a bit like Frozen or Arcane Enchanted, in that the boss shoots out glowing things that you need to get away from before they explode in painful fashion.

What happens with this affix is that each Champion, or the Boss, will occasionally stop moving and squat down for an instant, before shooting out two (per creature) glowing yellow spots. They go out from the monster with a sort of electrical squiggle graphic, and then sit there looking a bit like glowing green/yellow manhole covers. After about a second these explode, shooting out greenish jets of gas in an X pattern. Each "arm" of the X goes maybe 15 yards, giving the whole thing a range of about 35 yards, and it persists for several seconds.

One isn't that hard to avoid, but if you're in a melee fight and you get two or more around you, it's really tough not to get hit by at least one of the jets, and they are dangerous when multiples of them are stacked overlapping and you're right on top.

The casting range for the initial blobs is pretty far; they scatter them around you in a melee fight, but they have been observed being cast from a boss at least 50 yards away from the player with the little yellow circles landing near the player, ready to explode in an X configuration.

It can be thought of like Arcane Enchanted, except instead of little pink balls that turn into rotating needles, these are yellow-green circles that blow up into Xs. They're harder to avoid than Arcane Enchanted, but not nearly as damaging.

They do not debuff or slow you, just hit for big poison damage which you want to avoid standing in. It's a very effective "Denial of Area" attack, as the devs term things that make you move from one location to another.