Invulnerable Minions was removed from the game in patch v1.0.4, in August 2012.[1] The information below is archived from when the feature was existent.

Invulnerable Minions is a Boss Modifier that can only spawn on bosses (not Champions). It provides a permanent, unbreakable shield around all of the boss' minions, making them completely unkillable. The only way to destroy them is to kill the boss, at which point all of the minions will drop dead. (A most satisfying conclusion to the problem.) 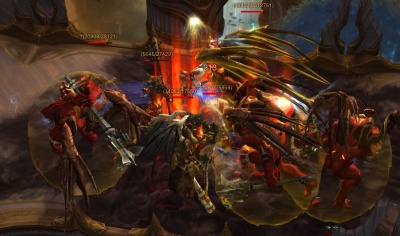 This property is generally considered the most difficulty boss affix in Diablo III, and has spawned fan campaigns to remove it from the game, or at least to make some changes to the function of the modifier. Blizzard has resisted those, though Patch 1.0.3 reduced the hit points of the boss to make these enemies a bit more manageable.

As of Patch 1.0.3, Morlu monsters can not spawn with this modifier.

Invulnerable Minions are probably the most impactful boss modifier, in terms of forcing players to change their approach. A very strong character can tank them, by locking onto the Boss and battering him down quickly. Most players though, especially in Inferno, have to hit and run and hit and run for minutes, when trying to deal with these monsters.

The biggest problem is that there's no way to kill the minions, which means they will keep hitting you while you can't hurt them. They can be slowed by some CC skills, but since they can not be damaged by attacks, slowing effects from cold or skills like Entangling Shot will not work.

On top of their persistent nature, the minions are very useful meat shields for their boss, soaking up projectile attacks. As such the most useful attacks against Invulnerable Minion packs are projectiles or spells that pierce enemies, such as Lightning Ball or Disintegrate. The boss can also be singled out with various attacks, as he is not shielded or specially-protected, and once he dies, all the minions die as well.

One of the common player suggestions to modify these enemies is to make the minions not so impermeable, so that other projectile attacks could pass through the minions and hit the boss, or so that melee attackers would not accidentally click on the minions instead of the boss.

Soon after Diablo III's launch, some fans began to complain that Invulnerable Minions was too hard. [2] The developers acknowledged that they were indeed a nasty specimen, but did not agree to make any changes to I.M. so soon after release, while player strategies were still evolving.

We’ve been watching feedback closely about all the affix types and we’ve seen a lot of responses to concerns such as “I have no problem with them” or “use skill X instead and you’ll be fine” or “I used to have trouble but then I got some X gear and now I’m fine”. This is what we intend to happen over time.

This did not quiet the hubbub, though in a fansite vote[3] a couple of weeks later, only a small minority of fans wanted some modifiers nerfed.

Should Some Diablo 3 Boss Modifiers be Nerfed? Total Voters: 3,643

Some other fans even made a video arguing against I.M., cutting in footage of characters dying with video of the Diablo III developers talking about boss modifiers.

Invulnerable Minions are frighteningly photogenic. Assuming players have time to snap a screenshot while running for their lives.

There are numerous videos showing off battles against this modifier on YouTube. Many of them feature unhappy endings.