The Lacuni (or panther men[1]) are beings that live in desert and mountain regions, especially in the Borderlands and in the Aranoch desert. Lacuni are commonly referred to as "cat people" by the D3 Team, for obvious visual reasons, since they are the Eastern continent version of the Lacuni found in the desert of Act Two in Diablo 2. 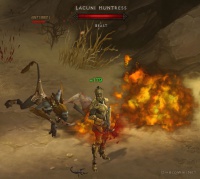 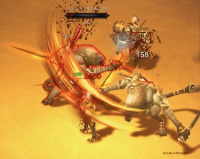 Superunique versions of Lacuni have a chance of spawning in the following areas:

The Lacuni tribes are indigenous inhabitants of Sanctuary, as opposed to the magically created Khazra (goatmen). They have been hostile towards humans for many hundred years, and no source of information tells of a time when humans and Lacuni lived in peace.

Well over 400 years ago, they were considered such a problem for Caldeum that the great military city of Lut Bahadur was built to keep the Lacuni safely away from Caldeum.

As more entries of the Writings of Abd al-Hazir are published, we hope to get more insight into the Lacuni.

Encyclopedia Sanctuaria[2] mentions the Lacuni as "once found only in the jungle environments of Kehjistan, trading freely with the cities there."

According to Encyclopedia Sanctuaria, they have always been considered somewhat "aloof and untrustworthy," but never before behaved in a threatening manner toward human society. This aggressive attitude apparently started about the same time as Diablo travelled west, over the Aranoch desert when they started raiding whole caravans upon.

Whether Encyclopedia Sanctuaria or the Writings of Abd al-Hazir are conflicting, or just describing different sites of their evolution remains to be seen. The Lacuni closer to Caldeum obviously disliked human society from the start, or at the very least, the last 400 odd years.

Read more about the Lacuni of Diablo II.