The Blood Thief is a special type of Treasure Goblin added to the game in Patch 2.1.2. These goblins are dark red in color with a purple glow, and they drop Blood Shards (no gold or items), which are used as a currency for gambling. Blood Thieves drop 1 shard at a time while running, and drop multiple stacks of 15-25 shards upon death, usually amounting to around 300 total per Blood Thief.

More than one Blood Thief can spawn at once in large, mixed-type packs, or during double goblin community buffs, and the total take of Shards from such an encounter can easily exceed the 500 hard cap.

Blood Thieves behave just like other types of Treasure Goblins, standing motionless until a player hits them or moves close enough to activate them. At that point they begin to run and giggle while dropping shards, pausing periodically to open portals. They will escape through a portal if left untouched for too long, escaping death and taking their fountain of Blood Shards with them.

Players may want to let such Goblins run around a bit before killing them, since their blood shards are much more valuable (relatively speaking) than the few gold coins and occasional item dropped by fleeing Treasure Goblins.

The 500 Blood Shard hard cap does not expand for Blood Thieves, and it's quite easy for a player to find themselves up against the 500 cap while still pursing or just after killing a Blood Thief. In that case a trip back to town to gamble off the surplus is required. This is especially true when 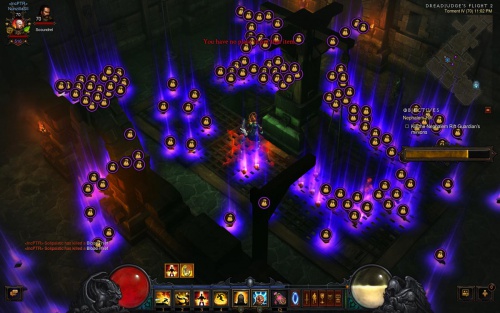 During early patch 2.1.2 testing on the PTR, Blood Thieves and the other new types of goblins (Gem Hoarders and Odious Collectors) could spawn in mega-packs up 8-12 goblins, all of the same type. This led to ridiculous amounts of Blood Shards dropping, with a whole pack capable of spilling out 3000+ shards in one small area. This was a great resource for gambling, but felt annoying with the low 500 cap, since players had to make multiple trips to town, gambling off 500 shards each time and bringing their larger game flow to a stop.

This issue was largely eliminated in later Patch 2.1.2 testing, when large packs were changed to spawn a variety of goblin types, making it so no more than 1-3 Blood Thieves (or Gem Hoarders/Odious Collectors) could appear at once.

Video of a player running through the thousands of shards left after killing off a Blood Thief pack during the PTR testing. Such numbers can no longer be found.