Vampiric is life leeching Boss Modifier that occurs on Champions, Bosses, and boss minions in Diablo III. This modifier allows monsters to heal themselves for a percent of the damage they deal to heroes or pets. 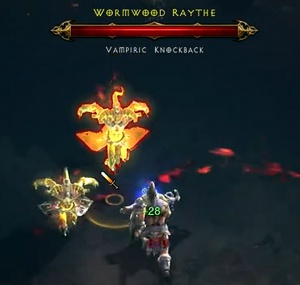 The amount of healing is not generally very noticeable, but it can be quite obvious when the monster has some unkillable NPCs to target, such as Tyrael or Leah or the Necromancer's skeletons, in which case some monsters become literally unkillable; capable of refilling their hit points with every single attack.

This modifier does provide some healing, but not enough that it has a major effect on many boss fights. During development the leech was much higher, but in the final game the healing effect isn't that noticeable. This is actually more true on Hell and Inferno, since on those levels monsters deal so much damage per attack that players simply can't let themselves be hit very often, thus the Vampirific effect gets fewer chances to kick in. Ranged attacking heroes might never notice it at all, since they can't let monsters hit them more than once or twice, if at all.

Vampiric is more noticeable on lower difficulty levels, especially if the monsters are targeting a Follower or pet, which they can hit repeatedly, unlike a dodging player.

It might be necessary to not resummon your minions, or try to lead the monster away from other NPCs, if it's healing too quickly from hitting them. Stuns and slows and roots and other CC effects help also, as they limit the speed/frequency at which monsters can hit. 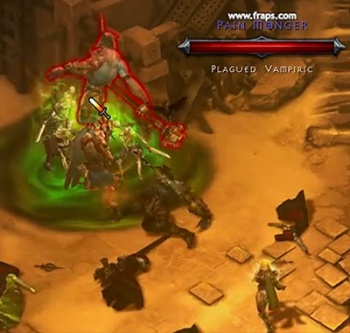 Vampiric was a much stronger life leech mod during development, and some monsters with the property were almost unkillable, since with just one or two hits they could completely refill their life. A fan reported such an encounter during the Blizzcon 2009 demo:[1]

A Vampiric monster ruined my last playthrough of the con. I tried to hit it with my Witch Doctor, but it kept healing itself by hitting my mongrels. I spent something like 5 minutes gently kiting it around, trying to get off a Skull of Flame or two before it could melee me. I didn’t even get to level up that time. Very, very mad.
--ExtraCrispy

This sounds a bit like the development version of Teleporter where it was an annoyance more than a danger.

There is no appearance change conveyed with Vampiric, not even a black cloak, bat wings, and fangs. (Much less a tendency to sparkle in the sun.) Players only notice the property when they see it in the tooltip hover text.

A vexing situation where a Vampiric champion is beating on NPCs with infinite health.