Plagued bosses create green pools of damage beneath their feet and in the immediate vicinity. These pools are not targeted at the player the way Desecrater is, but the Plague pools can be quite numerous, they appear frequently, and last for a considerable duration. During a long battle the entire screen can be covered in green pits, and this is very dangerous in enclosed areas where players can entirely run out of safe places to stand. Jailer, Waller and other movement impairing effects are very dangerous when combined with Plagued. 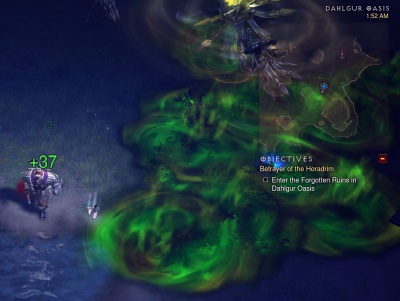 As well as dealing damage, the Plague pool inflicts a short term debuff that reduces the armor of Barbarians and Monks by 50%, and cause the Witch Doctor, Wizard, and Demon Hunter to take reflected damage.

Stay out of the poison pits. Simple advice, and Plagued can be easier to avoid than modifier like Frozen, Arcane Enchanted, or Desecrator, which can form right on top of your character. Bosses create quite a few Plagued pits though, and as they appear around the boss, not just under their feet (as Molten does) players can not engage a Plagued enemy in melee combat without needing to back up or sidestep regularly.

Fighting Plagued enemies in a dungeon or cave or other enclosed area is quite dangerous as the green pits continue to form, last a long time, and can render entire areas deadly to the touch. 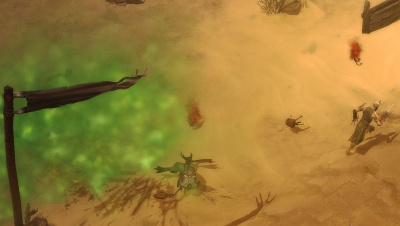 During development this modifier was initially akin to the Diablo II boss modifier "Poison Enchanted." It added poison damage to boss attacks and caused them to emit a steady stream of greenish gas, as a visual indicator.

The real fun came upon the boss' death, as they exploded in a huge cloud of green gas, dealing heavy damage to any character who remained in the area. You see the explosion in the shot to the right, as a Monk flees the scene of the crime. @Diablo actually commented on that shot, back in the day.[2]

The new concept art and screenshot are GREAT! What's the green cloud, a gas potion or a skill maybe?
Looks to me like the monk just killed a rare monster with the Plague affix. [email protected]

At that point in development, Frozen, Molten, and Plagued all worked much the same, with the added element and a big explosion upon death. These effects were all modified during development, giving them very different appearances and functions in the final game. Only Molten retained has the explosion upon death effect, and Plagued no longer have any appearance of being poisoned; even their plague pit attacks are a deep, emerald green that does not resemble gas -- compare Plagued to Ghom's poison gas effects.

Plagued pits are a nice, deep greenish color that provides a very clear "do not tread on me" warning. During combat they form rapidly and persist for about 10 seconds. Just running over one is quite damaging, and characters without decent resistances will find them highly damaging once they are encountered on Hell, much less Inferno.