Desecrator is a Boss Modifier in Diablo III.

It grants Bosses and Champions the ability to create an orange-red, "lava pit" below the feet of any nearby character. These pits deal substantial physical damage to anyone foolish enough to remain standing atop one, and force players to keep moving from spot to spot during combat.

The pits give away their appearance by growing from just a few dots of color into a swirling pattern, before manifesting fully. This gives alert players enough warning to move out of the way before the damage begins, assuming their path is not blocked by monsters, or other Boss Modifiers such as Jailer, Waller, or the like.

The Desecrated pools remain active for around 12 seconds before dissipating, and during long battles with a boss and minions all casting Desecration, entire screens can be come virtually impassable due to the pits of damage. 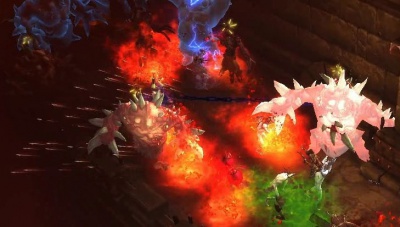 An Unburied spawns a mass of Desecrator pits.

As with many other AoE boss modifier effects, the key is to stay alert. On higher levels of Diablo III, it's essential that players keep their eyes open and not get too locked onto one target. Other enemies are always appearing, and spell effects swirling to life beneath your feet, whether from Desecrator, Plagued, Frozen, Arcane Enchanted or other mods must be noticed as soon as they start to appear, so evasive action can be taken.

This goes for ranged as well as melee attackers, and players learn, as a matter of course, to keep moving while fighting, since if something deadly hasn't appeared beneath your feet for the last few seconds, it's quite likely to do so in the immediate future.

There's always time to get out of the way of Desecrator pits between the time they start to form and when they are fully-formed and dealing damage. The real danger comes when you're unable to move, such as while afflicted by rooting effects like as Waller or Jailer or even Nightmarish. A character entirely surrounded by bosses might be unable to move as well, but that's a scenario to avoid even when Desecrator is not involved.