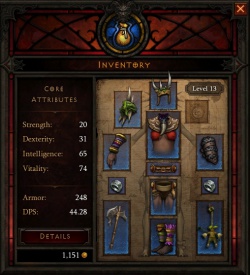 An amulet is a piece of jewelery that is traditionally worn around the neck. Amulets may grant various bonuses (including those of a defensive nature, though they are seemingly ineffective physical barriers) depending on their magical properties. Amulets found in Diablo 3 will have item affixes that determine their magical properties. Based on the current implementation of the paper doll, only one amulet can be worn at any given time. Amulets can be of various qualities, including magic, rare, components of item sets, or legendary and can be found with a socket in them.

Amulets can also be crafted by the Jeweler Artisan and the Blacksmith can place up to one socket in them for a price, unless it was found with a socket already in it.

Note: Amulets called Amulet do not have their own item page because in the beta so many are given that generic name. Mouse over the (db) link for their stats. When the game is released those called Amulet will have unique names.