ADVERTISEMENT
From Diablo Wiki
(Redirected from The Stinging Winds)
Jump to: navigation, search

The Stinging Winds is a expanse of desert in Act II. There are two parts to it, east and west and sitting at the top of both is the Khasim Outpost which also is the site of the Waypoint. 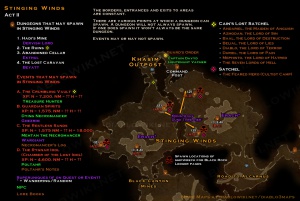 The following Superunique monsters can but might not always appear in Stinging Winds:

Waypoints are special plates on the ground that form a network of jump points allowing players to instantly teleport between them. The nearest waypoint for Stinging Winds appears in the Khasim Outpost.

Required for Judge of Character achievement - Found in Cain's Lost Satchels which can be found on the ground and in various dungeons.

The Stinging Winds is in some way involved in the following achievement(s).

No one really bothered with the Stinging Winds desert area until about 400 years ago, when precious ore was found there and mining began in earnest