Sand Sharks are large, melee-attacking beasts that look like a crocodile crossed with a shark. They can only attack on the surface, biting and clawing, but are able to "swim" beneath the sand, moving very rapidly while submerged and surfacing beside or behind their targets. They are found north of Caldeum.

Superunique versions of Sand Shark have a chance of spawning in the following areas: 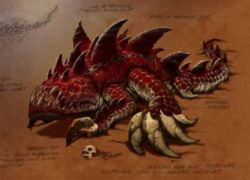 Concept art of a Dune Thresher.

These Sand Sharks once lived in the more settled locales, but was driven away to the deep desert wastes of the Borderlands a long time ago. The average city dweller will rarely ever see them.

The Sand Shark (Dune Thresher) is described in detail by Abd al-Hazir in his fifth entry in his renowned works Writings of Abd al-Hazir. [1] [2]

I was extremely tense by this point. I felt naked and exposed. What insanity had convinced me that coming out here was a good idea?

I looked out over the wastes in the fading light, trying to detect the telltale horned fins of the thresher cutting through the surface of the sand.

With absolutely no warning, the dune thresher violently broke the surface, all three scavengers caught in his horrifying maw. There was a massive explosion of sand as the thresher dove back into the ground with its prize. The ropes immediately snapped taut, and I thought Burroughs would be pulled to his death. I didn't understand how he thought he could reel in a monster that huge, but he wasn't even trying – just holding on. Read on >> 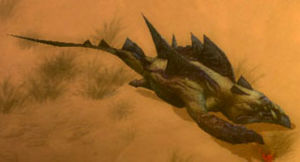 A Thresher swims towards its prey.

The Dune Thresher was the subject of a presentation during the Diablo 3 Heroes and Monsters panel at BlizzCon 2009. The following is not a direct transcript, but it summarizes the panel discussion.

The Dune Thresher
Work in Progress
AKA "Sand Shark"

This monster was largely inspired by the monsters in the movie Tremors. Those were crazy carnivorous giant worms that lived under the desert. They ate anyone they caught standing on the sandy surface, but were unable to reach anyone who stood on a rock outcropping.

We liked the idea of the sand being dangerous in D3, and tried to use this monster for that purpose in the sandy desert areas. He's been very tricky to get working properly, and that's got a lot to do with his behavior being too complicated to work smoothly with the speed of Diablo 3.

The idea is that the Sand Thresher would submerge, but only when he's on the sand. He can't burrow under other surfaces. Also, when he's submerged he's invulnerable. You can only attack him when he's above ground.

Our original idea was to let him attack while he was under the sand. This was going to be a nasty sneak attack, one that players could not fight back against. They'd have to run to a rocky section or a road where the Thresher couldn't attack, since we wanted players to have to play more tactically. 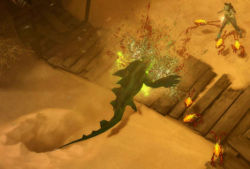 Witch Doctor casting Plague of Toads on a Thresher.

The idea was cool, but it didn't really work. The players were confused by this. They couldn't see the Thresher when he was underground, and didn't know what was happening. The Thresher has a dorsal fin, but it wasn't very visible in all of the screen chaos and battles going on. We had some cool diving animations to make the Thresher more visible, but even with those he wasn't obvious enough.

Even when players did see him, he didn't work, since players just ignored him. There was no reason to hang around and wait for the Thresher to come to the surface, when it was easier just to run to the next screen to find more non-hidden enemies to fight.

The fix we eventually used is what's in the game now. We're trying to play up the idea of the Thresher as a shark, like the original working name. He's a hunter, a stalker. Now he moves very fast while underground, and closes in quickly. He can no longer attack from underground, so he swims under the player and then emerges right next to them, ready for combat.

That's pretty fun, and he's a cool monster, and is very effective against ranged attackers, who don't like monsters they can't hit appearing out of the ground beside them. But the Thresher isn't at all what we wanted initially, which was a creature that interacted with the environment and forced players to do the same, and to play tactically. So we're still working on it, hoping to improve it eventually.