The Sundered Canyon is the area directly outside of the Caldeum Bazaar in Act II and connects it to the Howling Plateau. This is where you will run into the Enchantress for the first time and she will aid you in the quest that takes you through the canyon. 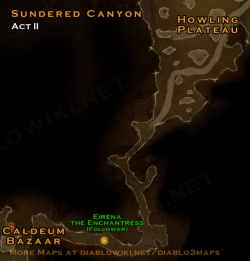 Waypoints are special plates on the ground that form a network of jump points allowing players to instantly teleport between them. The nearest waypoint for Sundered Canyon appears in the Black Canyon Mines or in the Hidden Camp

Sundered Canyon is in some way involved in the following achievement(s).