Dark Cultists are humans who worship the Prime Evils in the Triune religion/cult and gain powers and abilities from their dark masters. Cultists are Human type monsters.

Superunique versions of Dark Cultist have a chance of spawning in the following areas:

Little is known about these worshippers of demonic powers. Abd al-Hazir came across them on his travels in the Western Kingdoms, and he made an entry on his meeting with the cultists in his 42nd entry of the Writings of Abd al-Hazir, and which mysteriously also became his last.

He describes in detail the early stages of the ritual to make a human into a Dark Vessel, where "Teeth of Diablo" are nailed into the back of a willing cultist. Here is an excerpt:

That was when I first saw them, the dark cultists, arrayed in a circle. Their torches lit the macabre proceedings in a pallid light that danced over their garish rune-covered robes. I had heard tales of these hooded cultists and their depraved rituals, and I must admit to some curiosity upon seeing them. As their chanting droned on, I thought to make my escape lest they see me, but my attention was riveted by a pale, vacant-eyed supplicant being led forward. I do not know if he was of limited mental capacity, lost in religious mania, or simply drugged, but he was definitely not sound of mind as he knelt in the center of the thrumming circle. 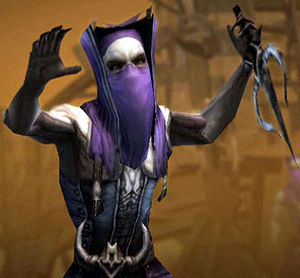 A Cultist, from the Monk cinematic.

As another spike was readied, I knew I could watch no more. I trembled with the thought of those nails being driven into me should I be caught. I averted my gaze as I heard the revolting squish of another spike sunk into willing flesh. My eyes fell on the robe of the lead cultist. The intricate runes woven into his robe undulated and swirled in sickening movement. As I watched, horrified, I could feel my sanity crumbling away. I began to back away from the wicked tableau, forcing myself to move slowly while my mind screamed for me to flee with abandon. When I could contain myself no longer, I broke into a full run, not caring what sound I made. I ran until I collapsed. And then, as soon as I was able, I staggered to my feet and ran some more.

A dark coven has formed in Tristram and I fear that their superstitious violence may damn the whole region. I discovered very little during my eavesdropping--except that the word "Jumper" was repeated several times in their chants. Oh well, now I journey to the safety of my home, where I may put these worries behind me.