Leoric's Manor is where Leoric himself resided during life, and lies within Leoric's Hunting Grounds in the Highlands or Sanctuary.

There is usually a Shrine somewhere in the courtyard but kill the monsters before clicking the shrine and going in to the Manor. Check the fireplace at the back of the room on the right hand side of the hallway. Here you may find some burnt logs which will turn out to be Leoric's Shinbone (db). This is a component needed to craft the Staff of Herding for the secret level Whimsyshire. 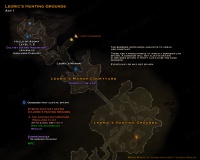 The following Bounties can appear in Leoric's Manor when playing in Adventure Mode:

Waypoints are special plates on the ground that form a network of jump points allowing players to instantly teleport between them. The nearest waypoint for Leoric's Manor appears through the very back doors beyond Maghda. It appears in the same place every time.

Leoric's Manor is in some way involved in the following achievement(s).