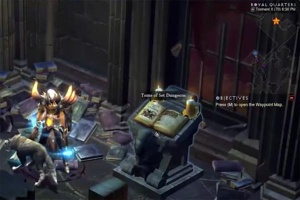 The Royal Quarters is a new dungeon area added in Patch 2.4. It extends off to the right from the staircase in Leoric's Manor, past rubble that was previously blocking that passageway. This is a non-random area, with the same layout each time.

Leoric's Manor is where Leoric himself resided during life, and lies within Leoric's Hunting Grounds in the Highlands or Sanctuary.

This area is notable for holding the Tome of Set Dungeons, a lore book found in the same location each game. It will drop a clue to find the location of the Set Dungeon corresponding to the item set your character is wearing.