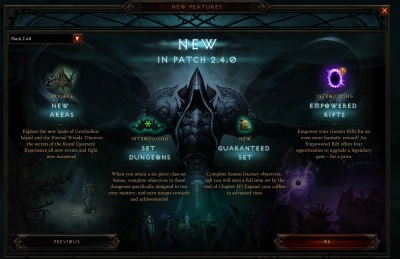 New Feature: Greyhollow Island The mysterious forested locale of Greyhollow Island is now open for exploration! Inhabited by new enemies and steeped in intrigue, brave the wilds and unravel the enigma behind the isle’s mysterious inhabitants. Be forewarned, however; the land itself is hungry for blood.

The Sanctuary you know grows larger. Two existing zones are receiving new, fully explorable additions, featuring new bounties and events. Survive the hunting grounds of the fierce yeti in the Eternal Woods, a new branch of The Ruins of Sescheron zone. The cultists have finally gotten around to clearing up the debris on those stairs in Leoric’s Manor, opening up the Royal Quarters for curious treasure hunters.

New Feature: Set Dungeons Test your mettle against one of twenty-four custom designed set dungeons! Each dungeon features a pre-generated, static course designed entirely around a specific class set. Don all six pieces of your chosen set and visit Leoric’s Library to obtain a clue on where these hidden trials are located. Hunt down your dungeon of choice and master it to unlock exclusive cosmetic rewards!

New Feature: Empowered Rifts Spend your gold to empower a Greater Rift, granting a fourth opportunity to upgrade a Legendary Gem. Gold costs vary based on the tier of Greater Rift level attempted, and bonus upgrades are granted only to those who successfully complete the rift, so spend wisely!

New Feature: Season Rebirth Transition seamlessly from Season to Season with the new Season Rebirth feature! This option allows you to instantly transform a non-Seasonal hero to a fresh level 1 Season hero, maintaining their name and hours played. All gear is removed and automatically mailed to you in the non-Season, providing up to thirty days to reclaim the items at a later time. Paragon level, completed achievements, and other accomplishments also remain behind with your non-Seasonal heroes.

New Feature: Revised Buff Bar A cleaner, clearer user interface makes its way to all platforms with our revised buff bar. Static buffs have been removed from the buff bar area, replaced by new indicators and timers that have been added to the skill bar. We’ve also included a collapsible buff-holder, which condenses party and group buffs and can be expanded by moving your cursor over the indicator or by assigning a hotkey via the Heads Up Display section of the Key Bindings option menu, revealing all your buffs at a moment’s glance.

New to PC: Action Combat The popular console version of Action Combat makes its way to PC! Massacre, Destruction, and Trap Mastery bonuses are now granted to players who chain together death, destruction, and clever maneuvers. Earn bonus experience, a temporary boost to movement speed, or a buff to your resource generation through tactical play.

Thrill of the Hunt

Grasp of the Dead

Blade of the Tribes

Blade of the Warlord

Fury of the Vanished Peak

The Gavel of Judgment

Pride of the Invoker

Renewal of the Invoker

Seeker of the Light

Thorns of the Invoker - Has been redesigned

Embodiment of the Marauder

Sword of Ill Will

Bindings of the Lesser Gods

Raiment of a Thousand Storms

Raiment of the Jade Harvester

Note: Existing items will not be affected by the following changes. Only new versions of the items will roll with the added Legendary power.

Thing of the Deep