Frozen Mages are demons. They were first seen in the Blizzcon 2009 demo in the tombs beneath the Act 2 desert. The extremely generic nature of their name makes it seem likely to be a place holder, to be replaced by something more interesting before release. 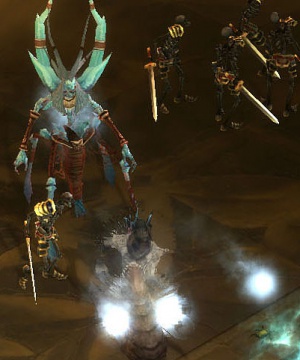 The Frozen Mages were found in all of the tombs below the desert. They usually spawned near a mob of skeletons, and would infrequently fire a multishot volley of their slow moving ice balls. The damage from these attacks was negligible, but they slowed any character they struck, and were quite annoying coming in during a battle with melee enemies. (Which is, of course, the whole idea.)

These caster monsters had a sort of cloaking or teleporting ability, and tended to appear out of thin air when a character drew into range. It wasn't clear if they were healing or teleporting, or were just invisible until character proximity triggered their appearance.

When killed, Frozen Mages live up to their name by shattering into numerous blue-tinged pieces - most of them long, spindly remnants of their insect limbs.

They look a little like something we have seen before: Baal. They have insect legs and the horn like spindles on their backs. The relationship with Baal might be purely coincidental.

The only attack they were seen to use in the Blizzcon build was the triple ice ball projectile. It's quite possible that these monster mages are something like the Vampires were in Diablo II. Those monsters could only use Fireballs in Act I, added Firewall in Act 2, and the higher level versions of them in Act 3 could cast Meteor as well.

With that history, it's not going too far out on a limb to expect Frozen Mages to possess Blizzard or Frost Nova or other such spells when/if they are encountered later in the game.

Poison Mages were also seen in the Blizzcon Build. They were identical in appearance, but had green spells and blood upon their deaths. 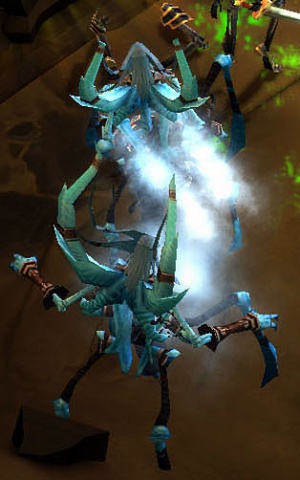 Nothing is known of the lore or origin of these monsters.

Frozen Mages are reminiscent of other Mage enemies in Diablo II, but they aren't visually related to anything we've seen before.

The Frozen Mage was first seen at the GamesCom 2009 demo and shortly after that at BlizzCon 2009.