The name of this monster is not confirmed, but they were seen in the BlizzCon 2009 demo. They look just like the Frozen Mage, but have green blood and projectiles, so "Poison Mage" seems a fairly safe guess. The name will be updated or confirmed when we have more information, and like the "frozen mage" it's probably just a working title anyway, to be replace by something less generic in the final game. 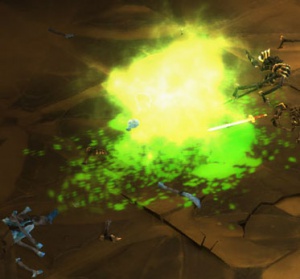 Less common than their Frozen Mage cousins, the Poison Mages were found in the same tombs beneath the Act 2 desert surface. Their attacks were similar, but used poison rather than chilling ice balls.

When killed the Poison Mages broke into scattered limbs, just like the Frozen Mages. They burst with a splat of green gore, and left a puddle of green blood behind, in addition to their cockroach legs.

The only attack they were seen to use in the Blizzcon build was the triple poison ball projectile. It's quite possible that these monster mages are something like the Vampires were in Diablo II. Those monsters could only use Fireballs in Act I, added Firewall in Act 2, and the higher level versions of them in Act 3 could cast Meteor as well.

With that history, it's not going too far out on a limb to expect Poison Mages to possess Acid Cloud or other such poison spells when/if they are encountered later in the game.

The Frozen Mages are identical monsters who attack with cold instead of poison. 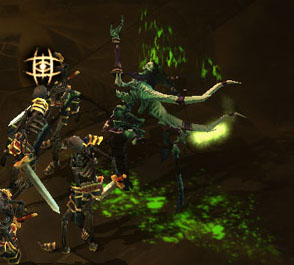 Standing behind a skeleton protector.

Nothing is known of the lore or origin of these monsters.

Poison Mages are reminiscent of other Mage enemies in Diablo II, but they aren't visually related to anything we've seen before.

If anything they actually look like something we have seen before: Baal. They have insect legs and the horn like spindles on their backs. The relationship with Baal might be purely coincidental.

The Poison Mage was first seen at the GamesCom 2009 demo and shortly after that at BlizzCon 2009.