Experience Bonuses are bonuses to Experience that the player receives when doing specific tasks, Much like achievements. They act like statistical records (See Below). They were first seen in the GamesCom 2009 demo. 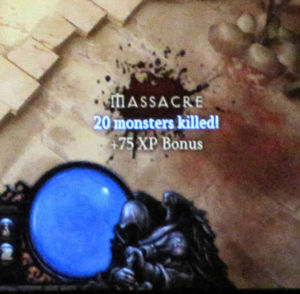 It is logical, that killing monsters as fast as possible is more beneficial to the player.

It can also be assumed that there are many types of Exp. Bonuses, other than "Massacre". For Example, the 1Up Diablo 3 Preview article states the following:

"In-game bonuses can also be had -- for instance, survive a battle that's taken you down to your last bit of health, and you receive an experience bonus for the enemies you just killed."

It means that if you survive a battle with low hitpoints, you will gain an experience bonus.

It has become known, that these Bonuses are Statistical and are therefore repeatable. If a new Character kills 5 monsters in a row, 5-kill streak becomes his/her record, if you beat that record, by killing 10 monsters in a row, it will notify the player by saying "NEW RECORD!" above the XP Bonus area. Not being able to break your record, will still give you an XP bonus, i.e. if you had a 11-kill streak, getting another 11-kill streak will award XP based on the number of kills.