This article describes a quest event seen in the Blizzcon 2009 demo. The event can be seen in the final game as the Crumbling Vault, which has several key differences from this development version of the game. The information below is out of date and preserved for archival purposes.

The Collapsing Tomb is a Diablo 3 quest first played in the BlizzCon 2009 demo build. The quest puts players in a treasure room style dungeon that will collapse in 4 minutes, killing any players who remain inside it after that time. Players must find the exit before then or die, while fighting off monsters and retrieving as much loot as possible from the numerous super chests that stock the dungeon.

Players began this quest by entering a portal on the desert surface level, The Howling Plateau. Once through the portal players appeared in a desert tomb style dungeon. A timer reading 4:00 was visible on the screen, and it began counting down at once. Each character who entered the tomb cried out a warning as soon as he/she arrived, "This place is falling apart. I've got to get out of here!"

The timer started as soon as any player entered. If other players came in a moment later, they did not get a fresh 4:00; just whatever was left of the initial 4 minutes. It would obviously be a wise idea to synchronize the entrances of multiple players, so everyone would start at once.

To reinforce the imminent danger of collapse, the dungeon shakes constantly, with large rocks falling from the ceiling (they knocked back and damaged players or monsters they landed on) and the screen shaking with their impacts. 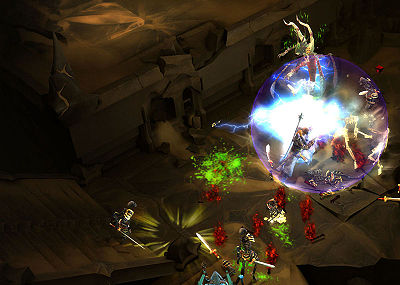 The Collapsing Tomb dungeon has more narrow hallways and stairways than the standard desert tomb dungeon.

Players who died in the dungeon collapse reappeared at the last checkpoint, on the desert surface near the dungeon entrance. It was not possible to re-enter the dungeon after the collapse, but players did keep all of the loot they'd found while in it.

Players who found the exit portal in time reappeared on the surface near the portal they'd entered through. In addition to all of the loot they'd picked up, they received 7995 experience as a bonus. This was a considerable amount at level 14~; individual monsters inside the tomb and on the desert surface were worth 50-100 each, at that level.

Once back on the surface in the Blizzcon build, the countdown clock remained visible, finally vanishing when it got to 0, when a "The tomb collapses." message appeared. Though no multiplayer reports have been seen, it's assumed that the timer continues so players who get out can remain notified about the progress of others in their party.

This quest was one of the examples the Diablo 3 team cited when talking about their Diablo 3 quest goals to shake up the play style and experience. Julian Love commented on it in an October, 2009 interview. [1]

There was a timed side mission in the Act II demo at BlizzCon this year. Could you talk about any other special quests like that we haven't seen before in the series?
Julian: Well, that's actually the first one that we've done that we -- well it's not the first one we planned for but it's the first one that we actually completed and put in front of people to actually test and obviously is a new kind of scenario for a game like Diablo. It's something we've been kicking around and working on and so far the feedback seems to be that people really enjoyed it.

So I think we're looking for ways to really open up a little bit the gameplay model for the game to include scenarios that are a little bit, you know, that are more interesting than the straightforward "Kill X number of monsters" or "There's the boss" kind of scenarios, things that really give you something different to do. And the whole point of that is really to support a lot more re-playability in the game.

As Julian said, this one changes the gameplay style by forcing characters to rush through or die. The other change is related to that, since the super chests are where the real dungeon rewards are found. In comparison to them, and the experience reward for finishing the quest, the monsters are speed bumps. Players are better off running right past the monsters, or where narrow hallways make that impossible, it's wise to kill them as quickly as possible.

Besides the time limit, the other big change to gameplay is due to the rewards in the tomb. There are a normal amount of monsters, including a lot of Tomb Vipers who are cloaked (invisible) until you are in range, when they materialize and assault you. There’s even a boss or two, to be found. The monsters aren’t the goal though, since there are dozens of chests all over the level, quite a few of them the “transcendent chests” that are the Sparkling chests of Diablo 3.

The real riches in the Collapsing Tomb come from these chests, many of which contained 8-10 stacks of gold along with 4-6 rare items, all of which came fountaining out when they were clicked upon. (There are no locked chests in D3 at this time.) As a result, the monsters in these tombs are obstacles, speed bumps that get between your character and heaps of rare items, and the larger goal; finding the exit before the roof falls on your head.