A Mighty Blow is bonus awarded for killing multiple monsters with a single attack, or with multiple attacks that go off in a very short period of time. A score of at least 6 is required to display a Mighty Blow bonus popup, which awards a small amount of bonus experience.

Higher scores of 20 can be obtained when numerous small enemies are in the area, and much higher tallies, of 100+, can be registered during intense battles where multiple skills trigger at once, extending the Mighty Blow tabulation to a second or more.

Multiple Mighty Blows can be registered in rapid succession, and big damage skills that hit numerous enemies at once, such as Wave of Light, will rack one up almost every time they are used on large groups of enemies. This can actually grow tedious for certain builds as the character makes the same one or two "Feel the wrath of Ytar!" remark over and over again. 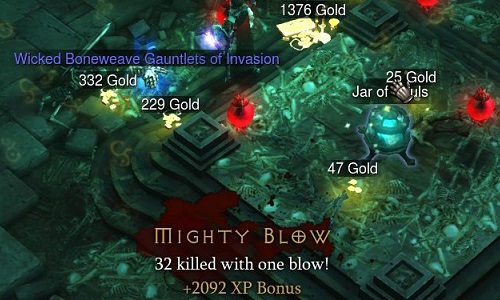 Mighty Blow bonus during the Jar of Souls event.
Retrieved from "https://www.diablowiki.net/index.php?title=Mighty_Blow&oldid=66633"