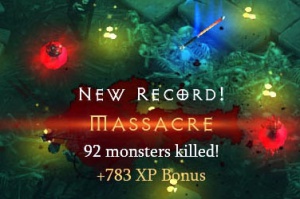 From the Jar of Souls.

The massacre (or "kill streak") is an event in Diablo 3 when a character kills numerous monsters without any large pauses between the deaths. Massacre bonuses award small experience bonuses, but their chief reward is fun and variety.

Scores of ten or twelve are easy to achieve in the early going, but much higher tallies of dozens or even hundreds of kills can be achieved in especially-crowded areas, or by players who "herd" monsters into large groups. Massacre bonuses are similar to and may be comprised of multiple Mighty Blow bonuses, which count especially large numbers of enemies killed at one time (either from a single attack or multiple attacks blowing up simultaneously.)

The massacre feature was first shown at the BlizzCon 2008 gameplay demo, where most players were enthusiastic about the new arcade-style feature. In an interview from that time[1], Jay Wilson said there was a maximum hard cap for the experience bonus, but that it was set it so high he didn't think anyone would ever achieve it.

Q: Is there any caps on the Killing Spree combo?
Jay Wilson: Yes, there is a maximum combination combo. It’s related to your level but I don’t think anyone can actually get it. It has a theoretical limit, but you are not likely to reach it.

In September 2009, Jay Wilson said in a press conference[2] that the idea for Massacre bonuses came about when the team was trying to give the Experience Shrine and Monster Shrine from Diablo II a new twist.

There are experience shrines in Diablo 3, though no Monster shrines.

The highest total recorded in the Diablo 3 beta was an incredible 11,391 kills in 106 minutes. This was only possible by abusing monster spawners, and is not possible in the retail game as monster spawners do not create such numbers of enemies anymore. (Besides the fact that no player is so bored and creative as to try such a thing with the full game to play.)