Greater Rift Keystones (GRKs) are required to enter Greater Rifts, a special type of Nephalem Rift added to Reaper of Souls in Patch 2.1. These keys have a level number as part of their basic function, from level 1-100, corresponding to the Greater Rift Difficulty. 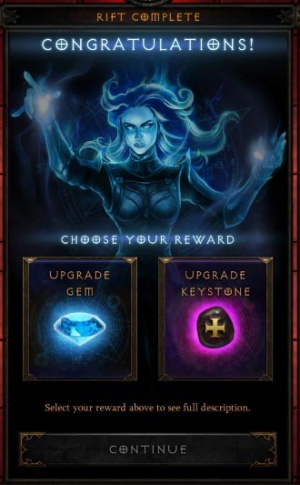 Initially in Patch 2.1 testing, level 1 GRKs were dropped directly by Nephalem Rift Guardians. That system was changed to have those monsters drop Keystones of Trials, which enable players to endure wave events in the Realm of Trials. Defeating more waves will earn higher level Greater Rift Keys. A Greater Rift Key is also awarded by Greater Rift Guardians, if players defeat it within the 15m time limit. That GRK will always be at least 1 level higher than the Grift it was earned on, and can jump up to 9 levels higher depending on how far ahead of the 15m timer players complete it.

Level 25-27 is roughly equivalent to Torment 6, so advancing beyond level 30 takes an exceptionally well-geared character. Players found various exploits to clear up through GR 100 during PTR testing of Patch 2.1, but as Blizzard adjusted the difficulty and removed exploits, the maximum Grifts cleared came down. When Patch 2.1 went live Blizzard considered GR 30 about the highest a very-well geared softcore character could handle, with pre-Patch 2.1 gear. The design is for GR 30-40 to be a considerable challenge, with only exceptionally well-geared chars or parties able to advance much beyond GR40.

At the start of the Patch 2.1 PTR, Greater Rift Keys of every level used the same icon as regular Rift Keys. Players assumed that was a temporary graphic and sure enough, a stone graphic with a big number on it was being used by the time Patch 2.1 went live. That graphic is often derided as cartoonish, so it's possible the visual will change yet again.