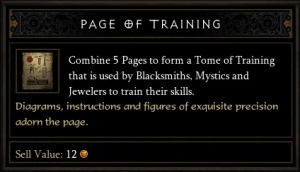 Pages of Training are artifacts dropped by monsters and chests in the dungeon. They have no function in of themselves, but five Pages can be combined into a Tome of Training. These tomes, plus gold, are required for most artisan training.

Pages of Training are very useful, since upgraded Artisans learn many new recipes and other skills of great use for your character. Both the Blacksmith and the Jeweler (as well as the Mystic before she was removed), require Tomes of Training for their upgrades, and since higher level upgrades require multiple Tomes (as many as 10 tomes per upgrade, with multiple upgrades per full level), players can expect to collect thousands of Pages of Training over their Diablo 3 careers.

Gathering Pages of Training is quite easy, as players need simply click on them when they drop. Pages are commonly found from killing monsters or opening chests or other objects, and very seldom from bookcases. Once picked up, pages stack automatically, to a maximum stack of 100. Pages can be transformed into Tomes of Training at any time, by left clicking on the stack of Pages. Every five pages turns into one Tome of Training, and these stack as well, of course.

Pages do not pick up automatically just by walking over them (as gold does) and gold pets do not pick them up either. As there is never any reason not to pick up Pages of Training, many players have asked that they be included in the auto-pickup. As of January 2012, the developers have not commented on this request.

Early in the beta test, Pages of Training most commonly dropped from bookcases in the Cathedral dungeon levels, and very seldom from monsters. This changed completely in a later beta patch, and thereafter bookcases almost never dropped anything other than Scrolls of Companion, health potions, and gold, while Pages of Training became quite common drops from monsters. As of January 2012, a player could expect to find about 12 pages of training from a single, fairly-thorough pass (around 60-90 minutes of play time, with a brand new character) through the beta content.

This too changed, and in a beta patch later in January 2012, Pages of Training were entirely removed from the beta, with all early Artisan training changed to only require gold. How these items will be balanced in the final game remains to be seen. 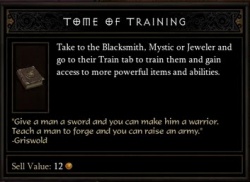 With just one Artisan (the Blacksmith) available in the Diablo III Beta test, and characters forced to repeat the same content multiple times, most players quickly trained their blacksmith well past a useful level, to the point that the majority of his crafting recipes had much too high of a Clvl requirement to be used by beta test characters.

This sort of rapid early game Blacksmith upgrading should not be an issue in the final game, where players will not repeat the early levels over and over again. Furthermore, the Mystic and Jeweler are rescued later in Act One, and with them both requiring pages of training for their upgrades, players won't just be power training their Blacksmiths.

That said, since Artisans are accessed by account, rather than by character, every Diablo III player can expect to max out all of their Artisans eventually. Also, since brand new characters have full access to Artisans and shared gold, they can make any recipe at all, given enough materials and gold. This will make self-twinking very easy in Diablo III, as a new character can instantly and cheaply make items with the Blacksmith that hugely outperform anything they might find in the dungeons, and that put them well above the difficulty curve. Players who want any challenge in the early going will need to refrain from twinking or using Artisans.