ADVERTISEMENT
From Diablo Wiki
(Redirected from Scrolls of Companion)
Jump to: navigation, search

Details about The Scroll of Companion prior to its removal have been saved for posterity. 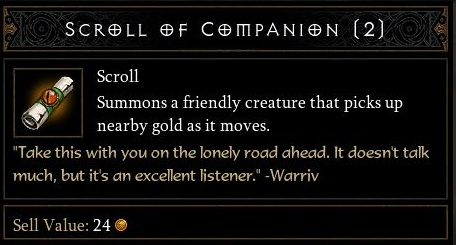 The Scroll of Companion was removed from the game during beta testing, in January 2012[1]. The feature will not be present when Diablo III is released, but may return at some point in a patch of expansion pack.

When functional, the Scroll of Companion summed a small animal or insect that scurried around the dungeon, picking up all the stacks of gold that fell from monsters, barrels, chests, or any other source. It was a great convenience for players, but the developers felt it was too handy, to the point that using one became essential. They were also displeased with the cute and fluffy nature of some of the pets. 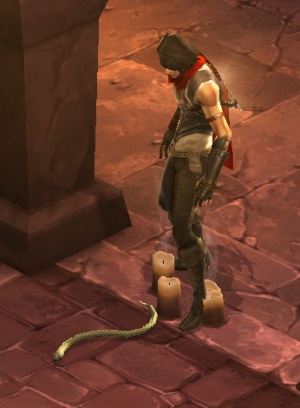 Demon Hunter with a greedy companion.

Blizzard announced the removal of the gold pets in a forum post in January 2012.[1]

In both cases these are features we felt were underdeveloped and just not quite good enough for the game in their current state. The companion pets felt like they were mandatory to maximize play efficiency and some of the pets were too cutesy for the gritty, dark world of Sanctuary. Neither of those are issues we felt like we could solve without a lot of additional work, and we’re trying to close in on a solid release date for the game, not move further away. When weighing these systems against releasing the game, we decided to cut these scrolls and stay on track for the game’s release.

We think we can make companion pets into a much cooler system (both mechanically and visually), and evolve the reforging scrolls into a more meaningful system at some point in the future. For the time being, they will not be in the initial release of the game.

Prior to their removal from the game, these scrolls dropped frequently, most often from bookcases or lecterns or other such clickables. They could also be found from monsters and chests and such, but less commonly.

To use the scroll a player simply right clicked it (or pressed the 1-5 key, if the scroll was mapped to one of those hotkeys), instantly summoning up a pet randomly-selected from a pool of nearly two dozen possibles. The pet set to work at once, scurrying (or flying) all around the dungeon picking up gold stacks and instantly adding them to the player's inventory.

When no gold stacks were available, the pet would stand close behind the player, and many of the pets had cute and amusing resting animations, such as when the rat or the bunny would sit up on its hind feet and rub its whiskers.

Gold pets lasted for several minutes, and died with a bloody grunt and a lurch of pain. New pets could be summoned at any time, though that action would dispel (kill) the existing one.

Most fans enjoyed the feature, but there were some complaints about the feature being too useful, as well as objections to the cuteness of some of the pets. Some players felt that fluffy little bunnies or cute little piggies were inappropriate[2] for the Diablo theme and mood, and ultimately the developers agreed with those complaints.