The Revenant Archer is a bow-shooting ranged attacker added to the game in the Reaper of Souls expansion pack. It can only be found in Act Five, as well as randomly in Nephalem Rifts. It is classified as a Reaper.

These archers are generally found with Revenant Shield Guards who use their shields to protect the archers during battle. They may also be created from human NPC guards, when transformed by Death Maidens, though this is unconfirmed.

Their AI is more advanced than ranged attackers found in Acts 1-4, and the Revenant Archers will retreat quickly while maintaining a respectable firing rate, forcing players to pursue them while getting pin-cushioned.

“As Malthael has imbued them with the ability to sense the living, revenant archers do not rely on their vision to find their targets. There is no place safe from their sightless gaze. They will find you through stone, wood, and even the ground itself. And once they have their quarry, they do not miss.” 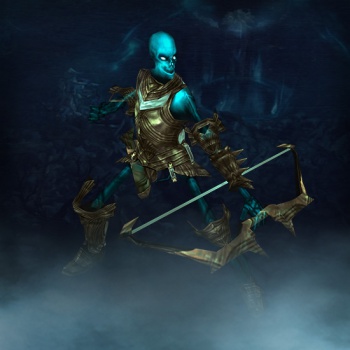 These superunique Revenant Archers can appear in the following areas: