The Summoned Shield Guard is a bluish ethereal Skeleton. Because it is wearing a shield, it is harder to kill than the Summoned Soldier [1]. It is classified as a Reaper. 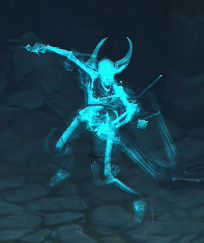