Entsteig is a country and a city in Sanctuary that is not mentioned at all within either Diablo or Diablo II, and it has no major cities shown on the map of Sanctuary in the Diablo II Manual. On the Diablo III World Map, Entsteig is shown to be in the region of the Sharval Wilds.

The capital of Entsteig seems to be the city with the same name. 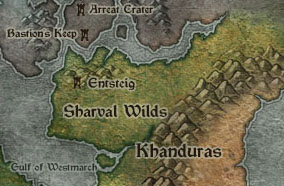 Entsteig is to the north of Khanduras, between the Western Kingdoms and the Barbarian Highlands. Known locations within Entsteig are:

At some point near the end of the Sin War, the army of Entsteig was annihilated at Blackmarch by demonic forces. The only known survivor of this massacre was Siggard due to his special ability.