This is the new (Diablo III) world map of Sanctuary. It shows locations like New Tristram, Caldeum (trading capital of Sanctuary), Xiansai (home of the Wizard character) and Ureh.

You can see more info on a section by clicking on the navigation panel at the bottom of the page.

This map is not final, and newer versions may yet be released. Some things on it differ from established canon, and ongoing Diablo III writing may further ret-con some locations. 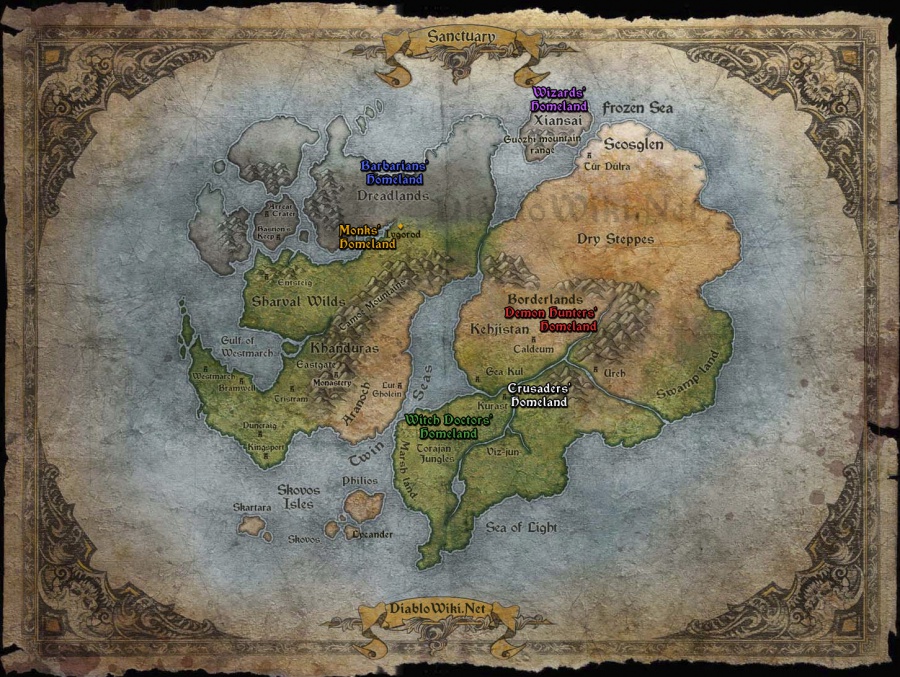 Bashiok posted about one mistake/pending change in January 2011. He quoted a fan's post, which pointed out an error in the map, compared to the world description given in The Black Road, one of the Diablo novels.[1]

“At the end of the winding road lay the city of Bramwell, a suburb north northwest of Westmarch.” The Diablo III World Map indicates the opposite. Also, “No one in the city [Bramwell] could look southeast toward Westmarch and not see the church first.” That map has got to be wrong.

That’s actually an error we intend to correct with the map and are holding the descriptions from The Black Road as correct.

In no way would I consider the books prior to The Sin War trilogy false or not worth reading, I think Diablo fans can still get a lot of pleasure from them, but you can consider them to be… tales, and not necessarily reference material.