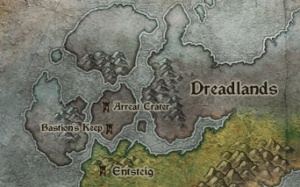 Arreat Crater on the world map.

Arreat Crater is what remains of Mount Arreat. It was created approximately twenty years ago when Tyrael destroyed the Worldstone to prevent Baal from corrupting it. It is a smouldering ruin of fire and rock located to the west of the mountains of The Dreadlands (formerly known as Northern Steppes), and north of Bastion's Keep.

As Mount Arreat was the symbol of the Barbarian peoples in their northern lands, its destruction was a crushing blow to their cultural consciousness. In the twenty years since that grim event, the Barbarian tribes are known to have spread widely across Sanctuary, many departing their traditional homelands due to the loss of their sacred mountain.

It is said that when the world was very young the tribes of the Northern Steppes were given a sacred charge. Somewhere deep within the great mountain, Arreat, was a source of great power, crucial to the well being of all humanity. The tribes acted as guardians of this artefact, and through this sacred duty, have shaped their way of life in observance of this power. These tribes are called "Barbarians" by many in the Western Kingdoms. 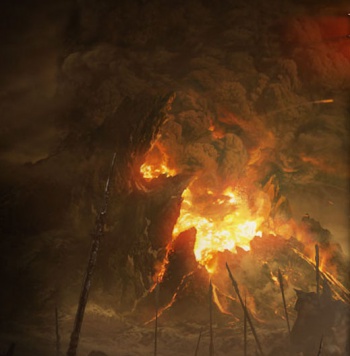 Mt. Arreat in Diablo III cinematic.
After the events of Diablo II, the power within, the Worldstone was destroyed, and the entire mountain exploded, leaving only a massive crater, which also shattered the Barbarian society.

Not much is currently known about the events surrounding Arreat Crater, however, it is thought to be of major importance in Diablo 3. It is depicted in the Cinematic Teaser, as well as on the Official Diablo 3 Website world map.

It's known that players will visit the site of the crater during Act III of Diablo III, where they must battle against the invading demonic horde in and around Bastion's Keep. See that article and the Crater Assault Troops article for more details.

It's also known that the Mountain and Crater will be seen in the Diablo III cinematic. a view of the erupting mountain as seen in the cinematic is visible to the right.

Arreat Crater is in some way involved in the following achievement(s).