The Witch Doctor, abbreviated WB, is a pure spellcaster, dealing with elemental magic, nature magic, necromancy and alchemy. The class has taken some inspiration from the Necromancer of Diablo II.

The Witch Doctor comes from the an area of the Torajan jungles called Teganze on the southern tip of the great eastern continent, just southwest of Kurast (where Act Three took place in Diablo II). You can see it located on the World map close to Kurast.

The fearsome Witch Doctor of the umbaru is believed to be a legend by many, but Abd al-Hazir has seen them with his own eyes, documented in his thirteenth entry of his Writings.

The Witch Doctor uses terrifying precision to assault his foe's mind and body with elixirs and powders evoking fires, explosions, and poisonous spirits. He can also summon and control undead creatures from the netherworld to combat his enemies.

He and she comes from the Tribe of the Five Hills, who frequently engages in tribal warfare with both the Clan of the Seven Stones and the Tribe of the Clouded Valley as a ritual rather than conquest. The tribes use these wars to replenish their supply of human sacrifices their civilization revolves around. Only those taken in battle are considered worthy of the ritual sacrifice according to the code of heroism and honour of the tribes.

The tribes define themselves by their belief in the Mbwiru Eikura, which roughly translates to "The Unformed Land". Their belief holds that the true, sacred reality is veiled behind the physical one we normally experience. Their vitally important public ceremonies are centred upon sacrifices to the life force that flows from their gods, who inhabit the Unformed Land, into this lesser physical realm.

Witch Doctors are finely attuned to this Unformed Land and are able to train their minds to perceive it through a combination of rituals and the use of selected roots and herbs found in the jungles. They call the state in which they interact with this other world the Ghost Trance.

The second most sacred belief of the tribes is their philosophy of self-sacrifice and non-individuality, of suppressing one's self-interest for the good of the tribe.

Their most current war created an intense social upheaval among the tribes due to an incident, of which details are lacking, but might be the reason the Witch Doctor has travelled west to Tristram.

The Witch Doctor looks a bit like the top half of one of Diablo II's Flayer Shaman, especially when outfitted in one of his oversized, colourful tribal masks. Judging by the skills thus far demonstrated, the WD fights a lot like a Necromancer, using cunning and guile, rather than direct physical attacks. Witch Doctors possess a number of mind control spells, the ability to summon and control undead servants, and a variety of direct damage elemental attacks.

Simple Mongrel and fire-enhanced Mongrel, primary minion of the WD.

The D3 Team has described the Witch Doctor as old and grizzled and fanatical. His magic is not clean and easy, like the fire or lightning a Sorceress can produce with a snap of her fingers. Witch Doctors get dirty. They summon walls of zombies that rip apart attacking enemies, they call forth undead demon hounds called Mongrels that they can detonate to deal heavy damage to their enemies, and they fashion the skulls of the dead into explosive grenades. The D3 team discussed the Witch Doctor's design concepts in the Denizens of Diablo panel at the WWI 2008.

For the Witch Doctor, we wanted to get a rich, voodoo vibe. We wanted to avoid straight up master-caster feel. He's not just conjuring things out of thin air. WDs don't just channel magic. They take real world objects and infuse them with voodoo magic. Our spell descriptions for the WD were like, "He's going to throw a shrunken head filled with a chemical concoction." Or "He's going to create insect swarms by blowing voodoo dust from his palms." Or "He's going to sprinkle dust in the air and cause illusions and frighten monsters away."

The team felt that it wouldn't be a real Witch Doctor without zombies. They go together naturally, but they didn't want normal slow wandering zombies. They mashed the idea of Zombies with the Firewall of previous games and came up with zombie wall.

The Witch Doctor is angry, someone who's been broken by a life that's dealt a few too many hard knocks and not enough joy. This is someone tired of being smacked in the head, so he uses his mystical powers to get into the heads of others (and if that doesn't work, a swarm of locusts will get under their skin).

The WD is clearly Necromancer-like, in his mixture of summonings, mind control curses, and sub-mage quality magical attacks, but the D3 team does not view the character as a replacement for the Necromancer.

Q: Is the witch doctor a replacement or spiritual successor to the Necro? They seem to have rather similar skills.
A: We don't view the Witch Doctor as a replacement. The Necromancer is a very cool char. We thought about him as a class and tried to see if we could improve on him, which is something we did with every class, and that led us to create the Witch Doctor. If we ever decided to make a Necromancer, the Witch Doctor wouldn't prevent us from doing so.

Jay Wilson commented further on this and detailed what makes the Witch Doctor different than the Necromancer in an interview with 1up.com in December 2008. [2]

We wanted to create a class whose pets were not his primary source of damage output. [...] Most Necromancer builds are very pet heavy. The pets do a lot of the damage, and a lot of mechanics are built around debuffing the enemy so your pets can be better against them or taking advantage of the bodies your pets create by blowing them up with corpse explosion.

The Witch Doctor's pets are more of a distraction -- they're his form of crowd control. [...] We wanted to have this general notion of a character who controlled all things slimy and gross, like zombies, bats, snakes, and spiders, but he didn't rely on them -- he just throws them out there. [...] Each element is like that, where it's another distraction while the source of primary damage is the Witch Doctor himself. This makes him play very differently than the Necromancer, which was intentional.

The Witch Doctor skills are arranged into to three distinctive skill tree categories:

The Plague tree skills are focused on spells that spread plague-related effects such as a Locust Swarm, toads and diseases. No passive skills have yet been revealed for the Witch Doctor Plague skill tree.

The Spirit tree skills will affect gameplay more direct than the Plague Skills. The Witch Doctor summons bats he turns to fire and sends on his enemies, sucking foes life energy out or makes them lose their minds. No passive skills have yet been revealed for the Witch Doctor Spirit skill tree. 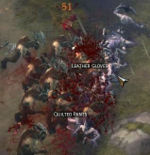 The Voodoo tree skills all focus more on the darker spectrum of the Witch Doctor. Bringing dead animals back from the grave to fight, or a terrifying wall of Zombies. No passive skills have yet been revealed for the Witch Doctor Voodoo skill tree.

The Witch Doctor class was unveiled at WWI 2008, together with the Barbarian. Besides a few name changes for spells, not much had changed for the Witch Doctor by mid June 2009.