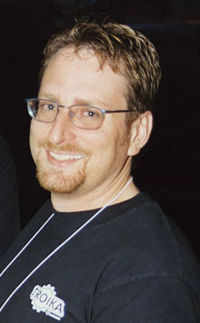 Leonard Boyarsky is the Lead World Designer for Diablo III, and is the head of lore, dialogues and quests in the game. He is a game designer and graphical artist, and affectionately known as "LeBo" amongst the Diablo community.

LeBo is a frequent interview subject during Diablo III promotion, and has taken a key speaking role during numerous Blizzcon panel presentations.

In 2011 Leonard spoke to Gamespot about his approach to better presenting the story in Diablo III.[1]

GameSpot: You joined Blizzard in 2006, but you're no stranger to the role-playing genre, having worked at Interplay and helping form Troika. What does experience with other development teams and a fresh set of eyes bring when you begin working on a game like Diablo III?
I can't speak to how other people have approached the franchise in the past, because I didn't work with any of the previous designers, but when I approached it, I came in looking at it from a deeper story standpoint than I think it had in the past. Shockingly, I found out there was a deeper story there; it just really wasn't presented in the best possible format. There was huge dialogue, paragraphs and paragraphs of dialogue when you talk to an NPC, and it didn't grab me the way it could have in previous iterations. I came in, and [vice president of creative development] Chris Metzen and I had a lot of conversations about bringing the emotional resonance to the series. It was all there in the background, and we just wanted to bring it to the forefront.

Leonard is known for his time with Interplay Entertainment and his work with Fallout 1 and Fallout 2 as well as the time at Troika Games. In 2005 he took a year off, returning to the industry when Blizzard offered him a position on the Diablo III project.

Leonard has a webpage with a gallery of his illustrative work and other information:

He has also been interviewed/profiled at the Fallout fan site, "No Mutants Allowed"