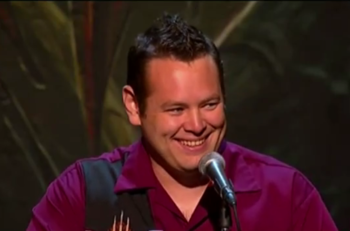 Kevin Martens is the Lead Content Designer on the D3 Team, and a Blizzard employee.

Though Kevin has spoken on various Diablo III panels at Blizzcon, he has not sat down for a great number of interviews. You can see all of his media appearances via the Kevin Martens tag on Diablo.IncGamers.com.

Before coming to Blizzard, Kevin worked for RPG juggernaut BioWare. He had major roles in the development of many iconic games, such as Baldur's Gate, Neverwinter Nights, and Jade Empire.[1]

In 2000, IGN conducted an developer profile of Kevin when he was working an Co-Lead Designer on Baldur's Gate II: Shadows of Amn.[2] In it, he comments on his background and interests:

IGN: Please summarize your professional background. How and when did you get into the games industry, and has making games lived up to your expectations?
Kevin: My background is a whole lot of years as a Dungeon Master and a writer. I've made several games at home with a few friends. I got into the gaming industry as a Writer/Designer at BioWare in September of 1998, to work on Baldur's Gate and Tales of the Sword Coast. Making games has proven to be a fun and challenging job.

IGN: What kind of gaming background do you bring to this job? When and how did you become interested in games?
Kevin: I started being a gamer when I first had access to Pong and Pitfall II on my aunt and uncle's Atari. I played Coleco Vision, Intellivision, and arcade games on a regular basis. My obsession with computer games began when I picked up Wizardry: Proving Grounds of the Mad Overlord for the Apple II computer system. O Glorious Monochrome! This was quickly followed with Ultima III and IV, Conan the Barbarian, Return of Heracles, Moon Patrol, and Karateka. I bought a Nintendo and a copy of Final Fantasy - my favorite game of my Nintendo years. I bought a Genesis and copies of Phantasy Star I, II, and Genghis Khan. With my purchase of an IBM-PC, I picked up Sopwith, Ancient Art of War, Hero's Quest which later became Quest for Glory, and Pirates. I've been playing primarily PC games ever since.

Kevin has not been an overly public figure, but Diablo: IncGamers did catch up with him and Julian Love during BlizzCon 2009 for an interview. [3] They discussed the Monk, randomness, bosses, acts and much more.