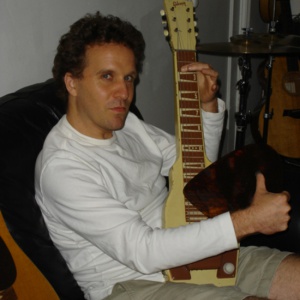 Matt with a huge guitar pick.

Matt Uelmen was the composer of the score for Diablo, Diablo II and Diablo II: Lord of Destruction. He was praised for his creepy ambient industrial music themes which fit the Diablo universe perfectly. The 12-string guitar theme of town Tristram being one of the most recognized work in video game history. Matt currently works at Runic Games, where he provides the musical score and sound design for their Torchlight series.

Matt Uelmen joined Condor Inc. (company name of Blizzard North before being acquired by Blizzard Entertainment in early 1996) in 1994 to work on a game on the Sega Genesis named Justice Leage Task Force which was his very first project. Work on Blizzard North's first game Diablo began soon after. Having done a remarkable job with music and sound design for Diablo (1996), Matt was invited to do sound design for Blizzards next title, StarCraft, which was released in 1998.

Two years later, Diablo II (2000) was released, and Matt delivered an outstanding score for the game. Creepy and melodic, the score was recognized with "Excellence in Audio" award by the Game Developers Choice Awards in 2001 [1]. Expansion pack Lord of Destruction had a different approach to the score compared to the previous games. Matt was working with a full orchestra for the first time and the result was very Wagnerian influenced music but fit the mood of the game perfectly.

Although Blizzard North was officially disbanded in 2005, Matt stood in Blizzard Entertainment to finish working as a co-composer on World of Warcraft's next expansion pack, Burning Crusade (2007).

Matt left Blizzard Entertainment in 2007 to spend some time away from game development. In 2009 he joined his old friends from Blizzard North in a company called Runic Games to provide musical score and sound design for their ARPGs named Torchlight (2009) and Torchlight II (2012).

After the release of Diablo II, Blizzard started posting MP3's of the week on their website [2]. Every piece of music had notes by the composer Matt Uelmen as well as various bonus tracks and outtakes. Although the original links on the old Diablo II website are long dead, they can be acquired by the link in the Diablo II wiki thread where all the notes have been archived.

Although Matt Uelmen isn't the composer of the score of Diablo III, a Blizzard CM Kaivax revealed that Matt had recorded around 90 minutes of 12-string guitar riffs [3]. How much of that is used in the score is not known.

If memory serves, it was late 2007 and Derek Duke and I had been witness to much of Matt’s early demo work on Diablo III. With the DNA of the Diablo music clearly so present in Matt’s mind, we invited him to pour his “musical stream-of-consciousness” into a microphone. What followed was a musical tour of the themes which were forefront in Matt’s mind at the time. He provided a running commentary as he played, noting the significance of each motif and even some clues to what changes he was percolating upon in the moment.

A great interview with Matt Uelmen and Max Schaefer about "Music of Torchlight II" can be read on their website (includes pictures of Matt and the orchestra as well as a track preview and a live music teaser) [5].

Matt has given a number of lengthy and informative interviews, covering his life and career. Some of the most valuable:

A few tracks from each Diablo title, composed by Matt Uelmen.