Sword of Justice is a five-issue, limited edition, Diablo III comic book. This title was revealed[1] during the Blizzard Merch panel at the 2011 San Diego Comic Con, and it went on sale in early 2012. So far two issues have been released, the most recent in late-January, 2012.

The story is set just before the beginning of events in Diablo III, around 20 years after the conclusion of Diablo II. The main character is a young warrior named Jacob, on the run from bounty hunters from his homeland in the far north, who finds Tyrael's sword (Tyrael is the Archangel of Justice) and travels with the powerful weapon and a female wizard named Shanar as they struggle for survival.

Each issue retails for $2.99 USD, and can be obtained at comic stores or purchased online. Blizzard has not announced plans to collect all five in a graphic novel, though many fans are hoping to see such a convenient option. 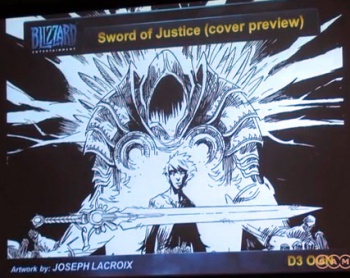 This series of comics is being written by Aaron Williams, with artwork by Joseph Lacroix and coloring by Dave Stewart. The announcement press blurb read as follows:

"From the world and legends of Sanctuary, the setting for the award-winning Diablo video game, comes the tale of a hero's birth. Jacob has fled from his homelands in the north, hunted by his kinsmen for the crime of murder. Led by the visions of an ancient prophet, pursued by his childhood friend, Jacob finds his destiny in a desert cave at the foot of a mountain carved in two by the sword of an archangel-- Tyrael. But will Jacob be able to claim the sword that could save his people, if not the world, before he's brought to 'justice?'"

Few details were initially revealed about the story, but the official quote during the panel is short and informative:

It's got a mortal hero, it’s got barbarians, it’s got demonic corruption, and a sexy wizard. Everything you could want.

Full video of the presentation can be seen here, courtesy of Gamespot. The Sword of Justice comic is revealed at about 29:40 into the panel.

Here is a brief summary of he plot events from the five comics that made up the mini-series, with a focus on story and plot info that relates to Diablo III itself. The following contains spoilers for the comic; you may wish to skip this if you're going to read the whole series and want to retain all surprises. Key pages from the comic are included with each issue. 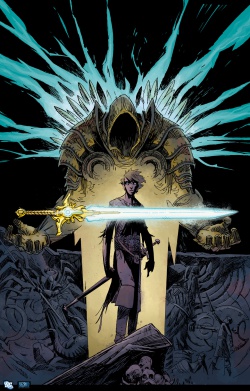 Cover artwork for issue one.

Issue one opens with the protagonist, Jacob, speaking with an aged mystic in a town square. It's something of an homage to Deckard Cain, as the sage provides a quick summary of the creation of Sanctuary.... and then the reader realizes the old man is a common beggar, con-man, and pick pocket in a city square in some town that looks a lot like Lut Gholein. He tells Jacob to proceed to a great mountain across the desert, where he will find his destiny.

While speaking, the old man steals Jacob's sword, which he takes to a fence. There is is waylaid, interrogated, and murdered by the bounty hunters who are pursuing Jacob, who learn where he told the young man to go. The action then cuts to Jacob as he trudges across a long desert, finally reaching a cave within a hollow mountain, where he finds a mighty sword driven into a rock within a huge cavern, the walls of which are covered in carvings that show scenes from his life.

The comic then depicts flashbacks as Jacob remembers battling against the maddened, feral, ravaging Barbarians in the frigid Northlands, while attempting to protect his fortified city of Staalbreak from their incursions. The fact that many of the Barbarians were driven mad by the destruction of the Worldstone is a key plot event in Diablo III.

Jacob's flashback continues, showing his Barbarian mother's unjust execution by his human father, the ruler of a human fortress in Wastelands, and the comic ends with a fight brewing between Jacob and his maddened father. 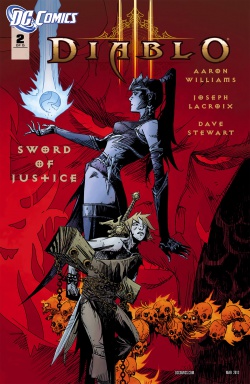 The second issue pics up directly where the first ended, with Jacob's insane father attacking him. Jacob slays the man in self defense, then flees from his home, events that clearly led to his efforts to evade pursuers in the start of issue one.

As the flashback ends, Jacob moves forward and seizes the sword, to the great relief of Shanar the Wizard, who had been waiting for him, trapped by the "angelic resonance" of the Crystal Arch (see sample image below), while she awaited the coming of the one for whom the sword was destined.

Men hunting Jacob for the slaying of his father, who tracked him thanks to the information given them by the aged seer in issue one, suddenly appear. Jacob urges Shanar not to slay them with her magics, but Jacob is captured after a fight, largely due to his being careful to incapacitate the men without killing them. Luckily and conveniently, Shanar is able to rescue him the next night, and after a brief battle they escape when she teleports them some distance away, into the Black Marsh of Diablo II fame. (Which is more swamp than marsh.)

There they trudge to the Forgotten Tower, and hide from Jacob's pursuers just as a horde of Goatmen appear, scenting after the humans in the area.

Diablo #1 isn't what one would call a rousing fantasy epic. Where it succeeds is in terms of characterization. Writer Aaron Williams displays a knack for dialogue. His execution ensures that Jacob comes across as more than another fantasy hero of humble origins. The frequent humor also helps lend this story a distinct voice of its own. The book is somber when it needs to be a slightly silly in other spots. Not unlike a lot of Blizzard games in that regard.

The art style doesn't necessarily evoke the Diablo games, either. This is probably for the best, as whenever adaptations struggle to capture the look of the source material readers usually wind up with the hideous CG visuals of God of War or the "crosshatch like it's 1993" approach in Gears of War. Joseph Lacroix's pencils are fairly loose and scratchy but packed with plenty of energy. The real star is Dave Stewart, who proves why he's still one of the best colorists in the business.

There's not much about Diablo #1 that overtly cries "Diablo!!!" But it is a satisfying read, and that's something far too few of the projects can ever claim.

Blizzard set up numerous interviews with the artist and writer as they promoted the first episode in December 2011. A representative quote[3] can be read here, with links to various interviews below.

How did you design Jacob? Is he based on any existing character in the Diablo III universe?
Certain characters are directly and 100 % inspired by the characters of Diablo III: a sorcerer, monsters, and many others… I am forced to remain vague because these characters will appear in the issues to follow. They are directly from the universe of Diablo, so they must be faithful to it: the anatomical details, the attitudes, and the clothes. Jacob, on the other hand, is a young man who has not found his way yet. To take the parallel of the creation of a character, he is this young, light-leather-dressed, human being who has not chosen yet which class he is going to play. He comes from a walled village in the Badlands next to mount Arreat. His people are in conflict with wild and hostile barbaric tribes. He is propelled into an adventure that is much bigger than he is. At the beginning, he seems weak and resourceless but he’s going to reveal himself little by little and his fate (as we can see on the cover of the first issue) is going to cross that of Tyrael and his legendary sword.

An interesting tidbit was revealed by the author during an interview with IGN Australia in December 2011:[4]

IGN: How much freedom did you have as far as developing the story? Was it an intentional decision to distance the book from the characters and locales of the games?

Williams: I had quite a lot of freedom, so long as I didn't contradict or run into game content that Diablo III was going to establish. That is, I had to make sure my wizard character, Shanar, used the spells at her disposal in the game, especially in combat. I also had a scene that was going to take place at the Forgotten Tower, but that area is, shall we say, "spoken for" and we didn't want to either spoil it or have the player think, "but this comic says two people came here and trashed the place already. How come it's not a smoking crater?" This wasn't as restrictive as it sounds, really, as most of the story takes place in an unexplored area of the Dreadlands.

The scene at the Goatmen-infested Forgotten Tower seems to be unfolding at the end of Issue Two, but it's more interesting to speculate about why Blizzard's writers didn't want a scene to take place there; apparently players will return to the region in Diablo III?