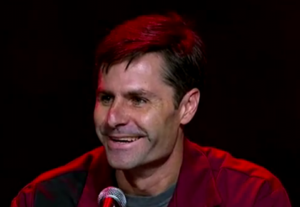 Jason graduated from Harvey Mudd College in 1995 with a degree in Physics. Shortly thereafter, Jason worked at Bungie Software as a programmer (1996 - 1998?) on the highly successful and critically acclaimed Myth series. After leaving Bungie in the late-nineties, Jason joined Blizzard Entertainment (Blizzard North) and began working on Diablo II as a programmer. He's been with Blizzard Entertainment since April 1999.[1]

Ben Boos, former Senior Artist for Blizzard North, made an interesting comment during an interview with Diii.net back in July 2008.

Diii.net: Did you pay attention to the D3 announcement, or is Diablo in the past and you’re concentrating fully on your future gaming projects?
Ben Boos: Oh heck yes, I paid attention. It was huge on several levels. Keeping a secret this big wears thin, for one! So to finally have the cat out of the bag is great. It was a milestone event to me. There are tons of strong emotions all wrapped into this franchise since the Diablo games were more than a mere hobby; they were my life for nearly 8 years.

Also, I'll be honest: What really made me sit up and pay attention to the announcement was to see how beautiful D3 had become! I remember back at Blizzard North when Jason Regier was first designing a rough game engine, and how it was always so exciting to see the new features added, day by day. So imagine how I felt to see this stunning demo. I've been quietly writing and illustrating a book for the last few years since taking leave of Blizzard North (sometime back in 2004), and I haven't seen the game in AGES! It's come a loooong way since then, to say the least. It's an entirely different beast! I mean, holy smokes, destructible environments for instance! I love it! By the way, after laboring on the environments for d2, and d2x, I would have LOVED to smash those up. It would have been cathartic.

Seriously though, the game looks great, and I not only paid close attention - I wound up corresponding with old Blizzard friends throughout the day and into the night after that announcement. It had a huge impact on me.

What a rush of memories!

After Blizzard North dissolved, Jason became part of the Blizzard Irvine team - becoming one of the few members of the former Diablo II team working on the sequel.

It seems we have much to thank Jason for (and compatriots) regarding their effort in laying the programming groundwork that went into Diablo III.