Diablo III Easter Eggs are humor and clever surprises and inside jokes found in Diablo III. These range from minor things like items and monsters named after Blizzard employees, to major game features such as secret levels.

This page lists all known Diablo III Easter Eggs, and is updated regularly.

Easter Eggs found in the game, both confirmed and rumored. This list will be greatly expanded and sorted once the game is released and discoveries increase apace.

This section of wall from the Act One Cathedral was spotted by at least two fans[1][2] during the Diablo 3 Beta test. It lists four names, all environmental artists from Diablo III. They are:

Two views of their names on a monument section of the wall can be seen below. 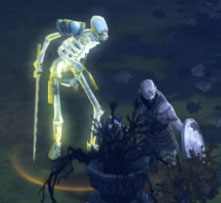 This very rare superunique boss monster is sometimes found in the Cathedral Garden, near a waypoint and just outside the Tristram Cathedral in early Act One. Caretaker McCree was first spotted during the beta, and documented extensively in an article on Diablo.IncGamers.com. See D3 Cryptozoology #1: Caretaker McCree, Deceased Mustachioed Groundskeeper for full details.

The monster is a large skeleton, whose full name is "Caretaker McCree, Deceased Mustachioed Groundskeeper." The monster seems to be a play on The Simpson's Groundskeeper Willie, with the name taken from Jesse McCree, a Blizzard employee best known for his work on World of Warcraft. The status of his mustache is unknown.

Update: after a little research online. it has been found that the "Mustachioed" in the caretakers name refers to a level designer for World Of Warcraft.

The most likely early contender for a secret level style of Easter Egg in Diablo 3 developed shortly after the game was announced. The early fan complaints about rainbows and bright colors that turned into the Art Controversy led to numerous jokes about rainbows, unicorns, happy clouds, and such. The D3 Team parodied this idea with their hugely-popular Blizzcon 2008 t-shirts, and some months later, when Diablo 3 Community Manager Bashiok posted a photoshopped Diablo 3 screenshot featuring a unicorn apparently farting a rainbow that created a deadly "love combo" of slaughtered monsters, the "Secret Rainbow Level" rumors were off and running.

If this genesis seems unlikely remember that the Diablo II Secret Cow Level got its start in similar fashion; it was a fan rumor in Diablo I that Blizzard ran with, first teasing the level through a humor April Fools' screenshot in 1999.

Data-mining during the Diablo III beta uncovered numerous clues and strong hints that such a level was in the game, including a mysterious crafting recipe that can be seen below: 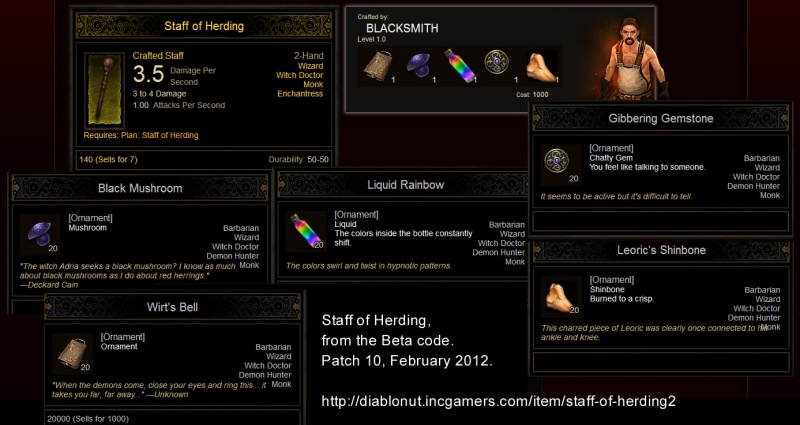 The Staff of Herding crafting recipe, via the Blacksmith, as seen in the Beta patch 10.

Blizzard did indeed add a secret level, called Whimsyshire, accessed by bringing the Staff of Herding to the pink lights on the path between old and new Tristram.

Named versions of the Savage Beast, normally appearing in the Southern Highlands or Northern Highlands of Act I, are often called "Alot". This is a direct reference to the online comic strip Hyperbole and a Half, and especially its episode The Alot Is Better Than You At Everything, where the grammar mistake of writing "a lot" as "alot" was portrayed by a beast-like creature called "an alot". In one panel, the "alot" is even shown charging at the reader, much in the way the Savage Beast charges at a player character.

Beckon Sail (db) - The cloak is named after Kate Beckinsale, who plays the main character in the Underworld films. Jay Wilson is an admirer of hers.

Hammer Jammers (db) - Named after MC Hammer and his extremely baggy trousers in the 1990 hit "U Can't Touch This".

These are Easter Eggs related to Diablo III that Blizzard released in other means than through the game, such as through screenshots or news posts.

Blizzard's Diablo III game info site includes a character builder that allows players to experiment with all of the active skills, passive skills, and runestones for each class. Sometime in September 2011[3] fans noticed that a click of the chat gem looking object at the bottom of the page would generate a random build.

This is purely an Easter Egg as it has no function or utility; it's just a fun little bonus feature.

This Easter Egg was served up through the Battle.net log in screen, during the early days of the Diablo III beta. A hidden text entry box in the forum account only accessible to Diablo 3 beta testers seemed without function, until after various hints and guesses, a fan figured out that "starcow" was the correct phrase to unlock a special animation of a space cow playing Nyan Cat music. 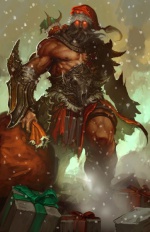 Blizzard released this image of a demonic-looking Barbarian Santa Claus as a special holiday image for Christmas 2010. The image was also included on the December page in the 2010 Diablo III wall calendar.

It appears to be a regular piece of Barbarian concept art that's been modified for the season, with the hat and Barbarian costume, the elf (a Fallen Imp) added and given a hat, the presents, the snow, etc.

This mysterious event occurred when the D2 v1.13 patch was released in 2009. The patch.txt said that two Mercenary names, "Klar" and "Tryneus" were added, and when fans dug into the code they discovered: [1]

Blizzard has offered no explanation for this inexplicable change. There is some fan speculation that it's meant to set up some plot development in Diablo 3, since there didn't seem any other reason to change those two merc names eight years after D2X was released.

If there's some plot reason to use the names of two Act Five mercs in Diablo 3, Blizzard could easily have just used two existing merc names. That they changed the names in this fashion, intentionally calling attention to their actions, makes it seem meaningful.