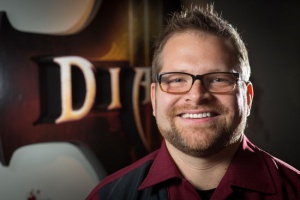 Josh Mosqueira is the Game Director for Diablo 3. He took that position in June 2013[1], after it had been vacant for several months since Jay Wilson stepped down.

Prior to that promotion, Josh was the head of the Diablo 3 console project, which he was hired to lead in mid-2011. Josh's first public comments came during the second half of that year, and he was a regular interview subject at the Gamescom[2][3][4] and then Blizzcon.[5][6]

Before joining Blizzard, Josh was best known as one of the Lead Designers for Company of Heroes, a critically-acclaimed[7] and top-selling World War II RTS. He also worked on Warhammer 40,000 and Far Cry 3. His full credited games resume can be seen on MobyGames.

Josh is seen in photos and a pair of video interviews from Gamescom 2011.