Chris Metzen.
Chris Vincent Metzen is the Vice President of Creative Development at Blizzard Entertainment. He is a one of the primary forces behind the story and creative direction of all Blizzard products.

Chris started as an artist at Blizzard back in the mid-1990s, and contributed a number of pieces of concept art to the WarCraft II manual, the Diablo I manual as well as the StarCraft manual. His art has remained integral to creating Blizzard's game worlds, though he works more on the story and content end of things these days.

Chris announced that he was retiring from Blizzard Entertainment on 12 September 2016.[1]

Chris is one of the Blizzard artists profiled on the Sons of the Storm website, and the following is excerpted from his profile on that site: 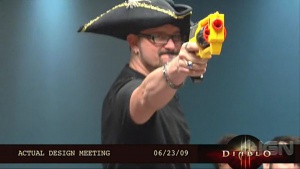 Chris on the Jace Hall show.

Define your style of art
I think I've always taken a comic-type approach to fantasy and sci-fi. I was heavily influenced by both Walt Simonson's and Jim Lee's pencilling styles for form, but I preferred the costuming, themes and general feel of Elmore and Parkinson's fantasy paintings. Still kind of working on the whole 'art style' thing...

At this point, I just use as much pencil lead on a page as I possibly can and hope the piece turns out!!! :)

Where do you do most of your work?
Any flat surface will do.

What are your favorite things to create?
Heroes and Villains. Monsters and mechanical designs are fun - but I dig drawing specific characters with specific stories related to them.

What tools do you use to create your artwork?
Usually just a good handful of mechanical #2 pencils and a few compressed shading sticks. I'm a big fan of colored pencils as well, but it's been awhile since I've gone that route. Photoshop's killer for finishing touches and such, but I prefer a good old fashioned pencil as opposed to pure digital art.

Chris' profile on Sons of the Storm showcases his work on Starcraft, Warcraft, Diablo, and has a great deal of personal artwork as well. Some samples of his concept art for Diablo I are archived in the Image Gallery: