Joseph Lawrence is Lead Sound Designer for Diablo III. He, along with the rest of the sound team, is responsible for in-game sound effects and music.

From 1990 to 1999 Joseph was a freelance sound designer and musician and did work for a long list of prominent Silicon Valley companies including Blizzard North. During this time as a sub contractor he worked on over 20 game titles. His freelance work for Blizzard North was included in Diablo II. In January 2000, he co-founded Futurity, a sound effects company that specialized in creating sound effects libraries on CD. Futurity was known for the highly regarded sound effects series called Metropolis Science Fiction Toolkit. In 2004, Joseph joined Blizzard as a sound designer. He is currently Lead Sound Designer for Diablo III.[1] 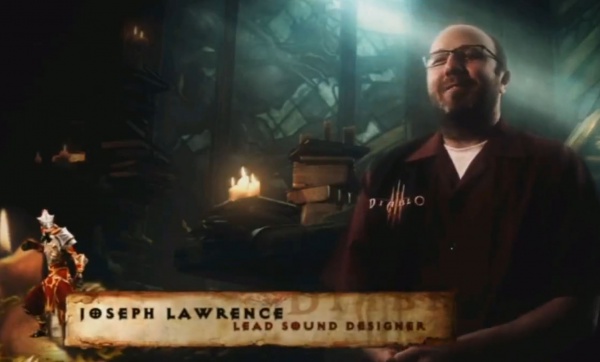 Joseph works with his sound team to create the audio effects that make the world of Diablo III come alive. Joseph and the composers on the team also handle the in-game music for Diablo III, while Russell Brower principally works on the music for cinematic sequences. Though, as with many groups of artists, they all colloborate with one another to craft the incredible auditory experience that Blizzard is known for delivering in their franchises.

In the Making of Diablo III DVD, Joseph comments on the process and philosophy that goes into creating that experience for the Diablo universe:

When you go into a Diablo game, you need to feel it and the sound is a huge part of how you perceive the game.

Mood of the game is very important from an audio standpoint – it’s everything. It has to be in an environment that just feels lush and cool and dark and dirty and dank and *smelly*. It’s gotta stink. The audio has to smell bad.

I like every game that I work on to have its own signature sound and, really, the only way to do that is to go out and create the material for that specific title. Fortunately, Blizzard allows us to go out into the desert and light stuff on fire.

That’s an interesting method that we’ve used over the years and I’m still perfecting it, and occasionally it goes wrong and it doesn’t work out. But, the camera is always rolling tape when it does happen."

Adventures in capturing the sound for Diablo III[edit | edit source]

In order to capture the sounds of the monsters in Diablo III, the team often turned to recording the sound of real world animals as the basis for the voice/vocal embodiment of otherworldly creatures. One animal that serves quite nicely for this purpose is the pig. During an outing to a pig rescue farm in Solvang, California for a recording session, Joseph met a woman who showed him a pig that played the guitar. After recounting this story to the audience of the Blizzard Sound Panel at Blizzcon 2011, he appealed for attendees to ask Jay Wilson to consider putting in a secret, guitar-playing pig level into Diablo III so he'd be justified in using the sound.

During another recording adventure, Joseph was capturing the sound of a llama chewing. He was captivated by the sound, knowing that it would serve well some purpose in designing the audio for Diablo III. So engrossed by this sound, he moved himself and the microphone very close to the llama. In an event that scarred him for life, the llama hawked up "the biggest, greenest, giant, llama Satan loogie" all over him and his recording equipment.

Matt Uelmen on the music of Diablo III[edit | edit source]

In an interview with Gamasutra, Matt Uelmen discusses the direction of Diablo III's music and sound:[3]

Gamasutra: How conscious are you that there's someone out there working on Diablo III who is tasked with living up to this thing you've created?

Matt Uelmen: Well, I'm aware of it, but I think that that team definitely has all the talent they need to get the job done right. I'm good friends actually with Joseph Lawrence, who is doing a lot of the audio work. I'm looking forward to it being its own distinctive thing.

You know, I'd really love to hear Joseph's ambient music out there more. I hope they don't feel they need to be too influenced [by my music], and that they are free to do their own thing, because the gamer in me thinks that would be more entertaining.

It seems the creator of the Diablo series' iconic and haunting music has great confidence in Joseph.

Game credits as reported on MobyGames.