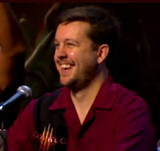 Jason seems to have started his career in the gaming industry at developer NovaLogic around 1998. At NovaLogic, he worked on a number of titles (principally combat flight simulator games including MiG-29 Fulcrum and F16 Multirole Fighter) as a member of the QA team. He moved from QA to game design with work on the tactical first person shooter Delta Force 2 and a tank based action game Armored Fist 3. Jason was also a member of the design team for the space combat simulator Tachyon: The Fringe and Comanche 4.

After his work on C&C4:TT, Jason joined Blizzard and is currently Lead Systems Designer for Diablo III.

Jason maintains a MySpace page where you can learn more about his interests as well as a LiveJournal.

Jason Bender (along with Christian Lichtner) were interviewed by The Escapist during Blizzcon 2010.[2] In the interview, Jason talks about the design of the Demon Hunter, general character design, skills, and the iteration process.

Jason (and Christian) were also interviewed by VG247 and discussed the Demon Hunter, PVP, the possibility (now confirmed as happening) of Diablo III on consoles [3] Jason Bender on the D3CE Behind the Scenes DVD.