Passive skill slots are unlocked at character level 10, 20, and 30. Once a slot is unlocked, players can select one passive skill to enable via that slot. There are around 16 passive skills per class (the number varies), with a new one enabled almost every level from 10 until 30, when all passive skills are available.

Each of the 3 slots can have one passive skill assigned to it, granting a huge variety of different bonuses. Passive skills can be switched freely, especially since the removal of the Nephalem Altar, though there is a 30 second cooldown each time a skill is changed. 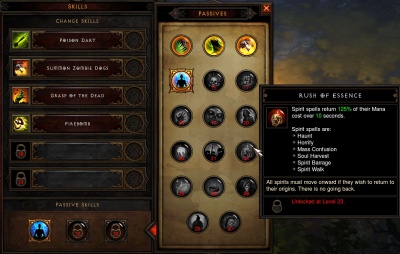 In Diablo III, all passive skills are truly passive, offering bonuses such as increased weapon or spell damage, movement or attack rate, minion effectiveness, healing rate, and dozens of other things. None are ever active bonuses though, such as skills you actually cast or active for some duration.

The implementation of skills, passive and active, changed repeatedly during Diablo III's development. The earliest system was much like Diablo II's, with skill trees that intermingled passive and active skills. This system soon changed with passive skills renamed traits and moved into their own interface. Traits could be fed 1, 3, or 5 points, and characters earned a new trait point every other level up, then later in development, every third level up.

The current and probably final system was implemented in late 2011, and present during the beta test. It has these skills once again called Passives, and accessed via a parallel skill interface. Only three passive skills can ever be used, and there are no passive skill points; these skills are either enabled, or not.