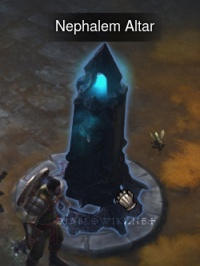 The Nephalem Altar was removed from the game in a major systems overhaul in Beta Patch 10.

Nothing like the Altar remains in the game, as its respec-enabling function is now provided by a cooldown between the time a skill is switched and the time a player can start using it.

Tooltip for the altar while in town.

The Nephalem Altar was first introduced in Beta Patch 5, as part of a system overhaul to provide some limits on respecs.

The point of the object was to prevent players from freely swapping their skills at any time, as had been possible until that point. After some experimentation, the developers bowed to fan complaints that this freespecs system was exploitative and cheesy, and that it contradicted the six-skill limit, as players were playing with their skill window open and reassigning skills constantly.

When it was enabled, players clicked on the Altar in town (one was also located at the start of Cathedral level 1) to open up their skill window. While using the Altar, a player could freely rearrange their character's skills without any sort of cooldowns or other controls.

The Altar was removed in Beta Patch 10, along with various interface objects such as the Cauldron of Jordan, the Nephalem Cube, and the Stone of Recall. In place of the Altar a cooldown system was introduced, with players able to rearrange their skills as desired, but with a 30 second delay before any newly-selected skill could be used.

That system was further tweaked in Beta Patch 13, when a whole new skills and runes interface was enabled, and the cooldown was decreased to 15 seconds. See the skills article for more details.