Details about The Cauldron of Jordan prior to its removal have been saved for posterity.

The Cauldron of Jordan was removed from the game in January 2012, during an overhaul of game systems and the interface.[1]

Prior to that, the CoJ was an interface item that players could use to sell items while in the field, instead of having to return to town and use the NPC merchants. Sale prices were identical to that paid in town, and items sold via the CoJ could even be recovered via the buyback feature, in case of a misclick or other form or regret.

The Cauldron was itself a feature replacement, as it was an upgraded version of the earlier Scroll of Wealth feature. 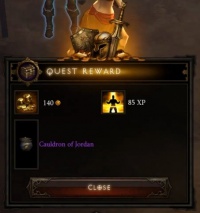 Cauldron as a quest reward.

So we’ve decided to remove the Cauldron of Jordan and Nephalem Cube. They were implemented to allow for salvaging and selling items when there was no quick and easy way to return to town. Now that the Stone of Recall exists, we found that keeping the Cauldron and Cube in the game detracted from the benefits of returning to town to sell items, salvage, craft, and interact with the townsfolk. It’s a good idea to break up combat so that players have a moment to evaluate their gear and crafting options before venturing back out. In addition, we’ve decided to just call it what it is and the Stone of Recall is now Town Portal, and is integrated directly onto the skill bar UI.

It's not clear if Blizzard's ever intended to include such a mechanism for the long term because in an interview with Diablo: IncGamers in October 2009 when asked about item selling Jay Wilson had this to say[2]

Diablo: IncGamers: How will we sell items easily in town, since there are no more town portals? How do you pop back quickly and easily without slowing down the gameplay?

Diablo: IncGamers: It’s going to be Diablo 2 in style? There won’t be pets you can send back, or NPC merchants out in the wild, or any other odd features?