Diablo 3 will launch with 5 playable classes. As of Blizzcon 2010, all five have been revealed.

At Blizzcon 2010, it was revealed that the fifth and final playable class in Diablo 3 is the Demon Hunter. She is mainly a ranged class with the ability to use shadow magic and traps and gadgets (like grenades! Little is known what this magic will be like, or if it will even use mana. She is a new type of character in the Diablo universe. The class's female version was the first announced, like the Wizard before her.

The Demon Hunter wears black, plated armor and a hooded cloak in the debut trailer. She is a young woman around the age of 20 and has white eyes when not fighting. Near the end of the debut trailer, however, while fighting off a horde of demons, her eyes glow a fiery red. She wields two crossbows in the trailer.

Like the four classes before her, she debuted with five of her skills on display. The first of these skills was the "Grenade" skill.

It's widely-expected that the fifth character will be a archer-type character, one who specializes in the bow and perhaps other ranged weapons. This speculation comes chiefly from looking at the roles the known characters occupy, and noting that there is no ranged attacker other than the Wizard, and no character with any special skill with bows or other ranged weapons. (No bows were seen in the game at BlizzCon 2008 or 2009, but one was seen to drop in the initial WWI Paris 2008 gameplay movie. No throwing weapons have been seen at all.)

Numerous articles speculating on what the fifth character might be have been posted. The main points include the following:

Jay Wilson made a comment about a possible reappearance of a character from Diablo 1 or 2 in an interview with IGN at Blizzcon 2009: [5]

IGN: You did mention that [the fifth class is] being revealed next year, and that it's someone from the previous games...
Jay Wilson: I did say that. I probably shouldn't have said that, because we're not sure that's going to be the case. It's just logical, that's what we tend to do. But it may or may not. I'm not gonna answer it, anyway... [laughs]

In another interview from Blizzcon 2009, Kevin Martens said the fifth character will fit an unfilled niche. [6]

Kevin Martens: It's going to fit a different niche than the existing classes, and it will still be awesome.

When asked why they revealed the Monk as the fourth character, Blizzard gave an interesting answer. [7]

Diii.net: Why did you choose to reveal the Monk this year? Was there some debate re: the Monk vs. the other unannounced class?
Kevin Martens: It was largely chance that we developed and revealed them in the order we did. We did the Wizard last year and that was a ranged, magical class. So this year we thought the Monk, as the game’s second melee class, would be a nice change. The Monk is a good contrast from the Barbarian, our real tank class. The Barbarian can’t move as fast as the Monk, and he’s much tougher. The Monk does as much damage as the Barbarian, but he’s not as tough or durable. He has to keep moving to keep from being dominated, but if he moves right he can dominate. This was the right time to reveal the second melee class.

While Kevin doesn't exactly say so, his reply contains a strong element of, "we didn't want to reveal 2 ranged attackers in a row." Since they had the unknown 5th character, and the melee fighter Monk to choose from for the 4th reveal, that strongly hints at a ranged attacker remaining for the last slot.

Wilson said at Blizzcon that his team doesn’t yet have a final concept for the fifth class, and that they recently changed their minds about it. But he’s quick to add that doesn’t mean that they’ve changed the character completely. “We changed gears,” he said. “We changed our high-level idea of the class because it was actually one of the first classes that we picked, years and years ago.”

The fact that the class was chosen first, he said, was part of the reason why it needs to be re-tooled. “We’ve had this class for four years, and it’s not as exciting to us as it used to be,” he said. “It had actually become a chain around our necks.” The new class isn’t a “complete departure” from the first concept, Wilson said. “Most of the skills can transfer over, but (the changes) definitely freed up our art staff to be a lot more imaginative.” 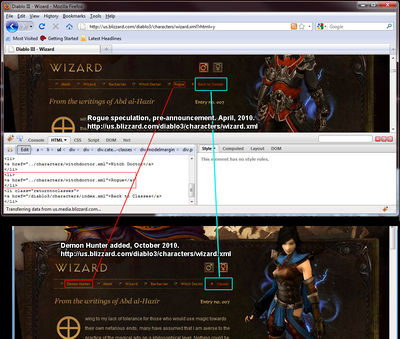 Midnight Murder from Diii.net looked at the code, hinting that the last class might be "Rogue" or another 5-character long name to the class. [9]

This assumption had some logic to it, but assumed that Blizzard wouldn't redesign their entire navigation bar, change the font or spacing of the other character names, etc.

As we can see from the comparison shot, taken in October 2010, the "Back to Classes" link was shortened to "classes," thus freeing up enough space to fit in "Demon Hunter." Which was placed on the far left, rather than the far right, where the open space originally appeared to be.

The D3 Team has confirmed that the Barbarian will be the only recurring character class from Diablo II,of the original 5 Diablo III characters. More characters will be added in expansion(s) and some may be revisions of earlier character types. We also know that the Diablo III dev team at once thought about making a Dervish class, but no information if that idea is completely shelved. It seems highly unlikely that the Dervish would appear though, as Blizzard have avoided talking about upcoming classes, and they would be unlikely to mention the class in passing if that is one class that will make the game.

Jay Wilson said the following in an interview: [11]

One of the things we really did not want to do – it's why we set that initial goal to not repeat classes – was, we didn't just want a rehash; we wanted to make the sequel and the sequel has new gameplay and new experiences. I know a lot of people really love the classes in Diablo 2 and it's not my desire to intentionally arc those people – I like those classes to; I love the Necromancer, he's my favorite class from Diablo 2 – but as our goal we really wanted to provide new experiences; that was our focus.

Jay elaborated on the issue of returning characters in an interview with 1up.com in December 2008.

Jay: I don't want to close the door on bringing back classes from Diablo or Diablo 2; I just don't want to do so with the initial release of Diablo 3. In Diablo 3, all of the classes should do something completely new. Then I'd like us to look back and figure out what gameplay gaps [exist].... Then we'd go back and satisfy our and the fans' nostalgia by pulling back some classes that we think really stood out.

Why No Necromancer?[edit | edit source]

Though many fans hoped to see the Necromancer return in Diablo 3, the team has repeatedly stated that he will not. Fans have also asked why the Witch Doctor was added instead, since the WD seems superficially similar to the Necro. Jay Wilson addressed this issue in an interview with Mtv in August 2008. [12]

"The problem was, we looked at the [Necromancer] class and didn't think that we could really make him a lot better," Jay explained. "We could add some new stuff to him but for the most part -- curses, corpse explosion, skeleton pets -- done. That's the class. We wanted to create new gameplay, so we chose to do the Witch Doctor as a different kind of class."

See the Necromancer article for more on this issue.

Fans have not just been waiting around for the next class, they have been busy making suggestions for Blizzard to consider. These fan classes include everything from a Flagellant to an Arcane Warrior.

After the Wizard was revealed at Blizzcon 2008, fan speculation was widespread for what we'd seen in the remaining classes. Most fans were sure that some sort of archer/ranged attacker would be added, but it was by no means clear that character would only use ranged attacks. The character types in Diablo 3 are being designed with a lot of variety, so there was much speculation about ranged hybrid characters; possibly able to engage in melee combat, or using a variety of magical traps, stealth forms, pets, etc.

The Monk was revealed at Blizzcon 2009, surprising most fans, even those who had expected some sort of light fighter to complement the heavy-tanking Barbarian. The Monk was certainly a better-kept secret than the Wizard, since before revealing the third character, Blizzard had made numerous remarks that the third character would fill a common RPG combat role, and was quite similar to a character from previous games in the series.

Looking back, it's clear that Blizzard was careful not to give any meaningful hints about the Monk before the reveal.

The third class to be revealed was the Wizard, who debuted at Blizzcon, October 13, 2008. Jay Wilson hinted at the Wizard in advance, in an interview with Videogamer.com: [13]

All the barbarian players are delighted and all the necromancers hate us. I understand, I don't begrudge them that. I would hate me too! But what I would say is that when we announce the next class, which is quite similar to a previous class, then all those players will hate us too. You can't make everybody happy, but I think when the game finally comes out players will find there's a good class for them, one they will love as much as the ones that came before. And if they don't, I absolutely promise that in the expansions we'll consider bringing back old classes. We just don't want to do it with the first release. We want to establish our identity.