Active skill slots are unlocked at character level 1, 2, 6, 12, 18, and 24. Once a slot is unlocked, players can select one active skill to enable via that slot. There are around 25 active skills per class (the number varies), with a new one enabled almost every level from 1 until 30, by which time all skills are available.

Each of the 6 active skill slots can have one active skill assigned to it, granting a huge variety of different bonuses. All skills can be further modified by various runestones. Active skills can be switched freely, especially since the removal of the Nephalem Altar, though there is a 30 second cooldown each time a skill is changed. (The skill switched to can not be used for 30 seconds, as a way to prevent players using skill switching to cheat the cooldown on skill use, or switching with exploitative frequency.) 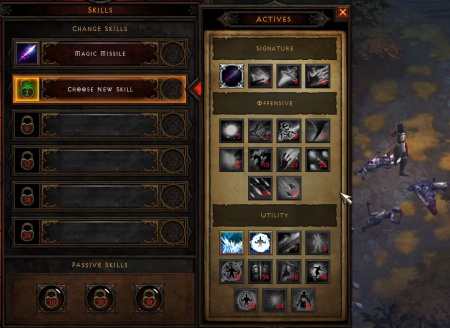 A Wizard selects something for his second active skill slot.

In Diablo III, all active skills are truly active, functioning as direct attacks, buffs or debuffs with some set duration, movement skills, or other direct actions. There are no passive bonuses or synergies attached to active skills. (See the passive skill slot article for more details on that topic.)

The skills system underwent as many major changes during Diablo III's development as any system in the game. Skills were originally grouped into skill trees much as we saw in Diablo II, with skill points to spend on a mixture of passive and active skills, which were laid out with synergies and dependencies. This system evolved repeatedly: into a sort of skill tiers format, into a menu with passive and active skills to choose from, into a menu with only active skills, and then further refinements took that to the system we see today.